Charles W. Chesnutt (1858-1932), African American lawyer, author and social reformer wrote The House Behind The Cedars (1900). He is considered one of the pioneers in writing on racial themes.

Charles Waddell Chesnutt was born on 20 June, 1858 in Cleveland, Ohio, to parents Andrew Jackson Chesnutt and Ann Maria Sampson (d.1871), by that time freed blacks. His brother Lewis was born two years later and his sister Lillian was born in 1871. His grandfather was white, and Chesnutt's sometimes controversial stories deal with the issue of people who were legally black but could "pass" themselves as white due to the fact that their skin was so light. Chesnutt's father, the son of a slaveholding farmer and his mistress, had served as a Union teamster for four years during the Civil War. The family moved to Fayetteville, North Carolina in 1866 to run a grocery store where young Charles helped stock the shelves and make deliveries. He was an avid reader and keen observer of the people and the socio-political times which was reflected in his future writings.

At the age of eight he entered school funded by the Freedmen's Bureau. After the death of his mother at the age of fourteen he was forced to become a pupil-teacher to assist the family financially when his father's store went out of business and had moved to a farm. He also taught in Charlotte, North Carolina and during the summers at various places throughout the state. He returned to teach in Fayetteville in 1877 and became the Fayetteville State Normal School for Negroes' principal. He married another teacher, Susan U. Perry in 1878. They would have four children together, Ethel, Helen, Edwin, and Dorothy.

Chesnutt's physical appearance was close enough to a white man though he still bore the burden of a mixed racial heritage. His intellectual sights were set on horizons farther than the still prejudicial post-Civil War Reconstructionist South, and by 1884 he had decided to locate to Cleveland, Ohio. He held various positions including office clerk and court reporter. He also studied for the bar and in 1887 passed the Ohio state bar exams, highest in his class, then started his own successful Attorney-at-Law and court reporting business.

"I think I must write a book. I am almost afraid to undertake a book so early and with so little experience in composition. But it has been a cherished dream, and I feel an influence that I cannot resist calling me to the task. . . . The object of my writing would not be so much the elevation of the colored people as the elevation of the whites--for I consider the unjust spirit of caste which is so insidious as to pervade a whole nation, and so powerful as to subject a whole race and all connected with it to scorn and social ostracism--I consider this a barrier to the moral progress of the American people: and I would be one of the first to head a determined, organized crusade against it."
--Charles W. Chesnutt, journal, May 1880

After years of aspiring to write a novel and with his confidence that he could well expound on the difficulties of pre and post slavery life, he finally turned his pen to writing sketches, essays, and short stories. Uncle Peter's House (1885) was his first published short story, appearing in the Cleveland News and Herald. Many of his works were published in various journals and newspapers, including Family Fiction, Puck, The Overland Monthly, The Southern Workman, Youth's Companion, and Atlantic Monthly.

Chesnutt was one of the first black writers to have their work published in such a prestigious literary journal as the Atlantic. His first was The Goophered Grapevine, using folklore and dialect to bring his characters to life, dealing with the issues of racism, prejudice, slavery, miscegenation, and the art of conjuring. The Conjure Woman (1899) was Chesnutt's first book and was met with critical acclaim. It is a collection of his short stories with tales of clever slaves overpowering their masters. He closed his company to concentrate on his writing. The House Behind The Cedars (1900) was his first published novel. The story follows John and Lena Walden, mulatto siblings who pass for white in the postbellum American South.

The Marrow of Tradition (1901) is based on stories told to him by relatives who had escaped with their lives during the Wilmington, North Carolina race riot in 1898 and was a financial loss for Chesnutt. He was forced to re-open his reporting business to support his family. The Colonel's Dream (1905) was met with poor reviews. It was at this time that Chesnutt became socially and politically involved with Booker T. Washington as an advocate for racial reform. He was awarded the National Association for the Advancement of Colored People's Spingarn Medal in 1928 for his efforts as an educator and writer.

Charles Waddell Chesnutt died at home on 15 November, 1932 at the age of seventy-four. He is buried at the Lake View Cemetery in Cleveland, Cuyahoga County, Ohio.

"The workings of the human heart are the profoundest mystery of the universe. One moment they make us despair of our kind, and the next we see in them the reflection of the divine image."
--Charles W. Chesnutt 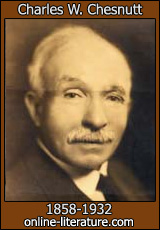 Here is where you find links to related content on this site or other sites, possibly including full books or essays about Charles W. Chesnutt written by other authors featured on this site.