Gaius Julius Caesar (July 100 BC  15 March 44 BC), Roman general, statesman, Consul and notable author of Latin prose, played a critical role in the events that led to the demise of the Roman Republic and the rise of the Roman Empire through his various military campaigns.

How did Caesar's behavior outside the Capitol just before he died affect your reaction to his death?... 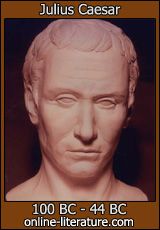 Here is where you find links to related content on this site or other sites, possibly including full books or essays about Julius Caesar written by other authors featured on this site.