Being the whole story of Sara Crewe now told for the first time.


Sara Crewe is a very intelligent, polite, and creative young girl. Born to a wealthy soldier in India, Sara was brought all the way to London in Victorian-era England for a formal education and to escape the inevitable hardships of India such as disease. At the upscale boarding school, Sara is forced to tolerate the haughty, disdainful headmistress, Miss Minchin. It only gets worse for poor Sara Crewe when a distressing event unfolds to leave her impoverished and at the mercy of the jealous Miss Minchin. Sara undergoes numerous trials as she humbly allows herself to be subjected to servitude, but with the help of several dear friends (both seen and unseen), she remains as proud and unwavering and imaginative as ever, proving to all that anyone can be A Little Princess.--Submitted by Lucia


This is the story of a British girl named Sara born in India to a very rich man named Ralph Crew, who was a captain in the army in the early 19th century. He sent his daughter to England to study. Sara is treated like a princess in the boarding school. When Captain Crew passes away in India Sara is left to the mercy of the greedy headmistress, who starts treating her as a servant and forces her to help in the kitchen and sleep in the attic. Most of the nights she has nothing to eat and no one to talk to. A man moves next door and Sara talks to him; he turns out to be her father's friend and business partner. He was also searching for Sara, so, he becomes Sara's guardian. Sara has a lovely heart and a divine power of imagination that allows her to survive through hardships and humiliation. Sara is a princess at heart. --Submitted by Satwinder

Theme of A Little Princess?

I am doing a research essay, and we are suppose to look up themes of our book. My book is A Little Princess, and i have no idea what the theme is..help?!!

I`m writing an essay for school with the title "Illustration India`s in the 19. century on the basis of "Secret garden" and "A little princess" by Frances H. Burnett. Can anyone please tell me if Frances Burnett was in India or if she liked India? Did she criticize the colonization? And did she want to show India as a mystic country? I`d be very glad and grateful if anyone could help me and give me some more information..... This essay is very very important!!!! Thank you!

My favorite book as a little girl!

i do agree that the movie was a sub-standard remake of a classic book, as it left out so many major factors, it could have been a by far better movie! i use to read this book with an unhealthy appetite! my copy became dog-eared, and this book allowed me to start looking to use my imagination as a little girl, i became known as a day dreamer! lol. I will encourage any little girl to read it, it will always be an all time favorite for me!

I don't think any filmed version has come close to the greatness of this book. In fact, I've wondered why the films weren't truer to the book, which could be filmed practically excatly as written, it is so exultantly cinematic. I've read it more than ten times since I was a child, and it holds new wonder for me each time. It's been an influence in my own writings more than I'd guessed. By the way, the edition with illustrations by Ethel Franklin Bettes is by far the best -- they are wonderfully evocative paintings, particularly the one of Sarah looking out at the birds. It really is my very favorite book. The movies -- bah!

On a search flook for her books, unabridged.

The movie has filled my heart with love and joy. I loved this movie very much and beening as old as I am I still cry at the end . This is a okay site for others who feel the same way.

Here is where you find links to related content on this site or other sites, possibly including full books or essays about Frances Hodgson Burnett written by other authors featured on this site. 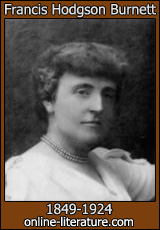