Are you hero enough to unite yourself to one whom you know to be suspected and despised by all around you, and identify your interests and your honour with hers? Think! it is a serious thing.

I should be proud to do it, Helen! - most happy - delighted beyond expression! - and if that be all the obstacle to our union, it is demolished, and you must - you shall be mine!

With many parallels to Annes own life, at times brooding and dark The Tenant of Wildfell Hall is also a story of moral courage and hope. Examining Victorian morals and values, young Helen Graham sets out with steely resolve to support herself and her son Arthur after leaving her abusive husband. Initially it was met with mixed reviews, many critical of its content and complex structure. However, it is now regarded as an exemplary feminist work. While Anne Bronte had a difficult childhood, her mother dying when she was one and her father often occupied with his clerical duties, she, like her siblings, used to advantage what she knew best and wrote about it. She was a deeply passionate and spiritual person although often presenting a stoic exterior to her sisters, much like Emily did. Anne often struggled with depression and home sickness and though she lived a short life her novels and poetry have been read, studied and admired world-wide into the 21st Century.

Anne became especially close to Aunt Branwell and she and Emily were at times inseparable. Together they created their imaginary world Gondal in response to Charlotte and Branwells Angria, with fictitious characters and setting that would be the source of numerous poems. Anne also loved to draw. At age fifteen she enrolled at the Roe Head school in Mirfield, where Charlotte was a teacher and paid her tuition for two years. Anne was a dedicated student and adapted to life away from home better than Emily had. However, during her time at school she had an episode of spiritual crisis which she wrote about in many of her poems including The Doubters Prayer and Self-Communion;

And all my life will soon be gone
As these past years have slipped away.
He took my childhood long ago,
And then my early youth; and lo,
He steals away my prime!
I cannot see how fast it goes,
But well my inward spirit knows
The wasting power of time.

Like her sisters Charlotte and Emily, Anne did not want to be a financial burden to her father and looked for a way to contribute to the household income. As an educated daughter of the village curate in the Victorian era it was easy for her to obtain a respectable position as governess after she finished school. She too initially experienced difficulties with the undertaking, dealing with unruly children who were resistant to learning. Her few months at Blake Hall provided fodder for her future novel Agnes Grey (1847);

As an animal, Matilda was all right, full of life, vigour, and activity; as an intelligent being, she was barbarously ignorant, indocile, careless, and irrational; and consequently, very distressing to one who had the task of cultivating her understanding, reforming her manners, and aiding her to acquire those ornamental attainments which, unlike her sister, she despised as much as the rest:

Annes next post started in 1840 and lasted five years: Reverend Edmund Robinson and his wife Lydia had four children. Anne became close to them and travelled with them to York Minster and on holidays to the North Sea resort town of Scarborough in North Yorkshire. Life at Thorp Green was fairly enjoyable for Anne although many of her poems express her longing for Haworth. In 1842 her Aunt Branwell and fathers curate William Weightman (1814-1842) died. Some speculate she had fallen in love with him and that he is the object of her affection in many of her poems. She returned home for a time to attend their funerals. Her brother Branwell also held a position with the Robinsons, tutoring their son Edmund but he had an affair with Mrs. Robinson and left in disgrace in 1845. Anne resigned the same year but remained in contact with Bessy and Mary Robinson until her death.

Back home at Haworth Anne was happy to start writing again. Charlotte was editing the manuscript for Poems by Currer, Ellis, and Acton Bell and it was published in 1846 by Aylott and Jones of London, the family paying the cost. A year later Annes first novel Agnes Grey was published, also under her nom de plume Acton Bell. It received mixed reviews. Her second novel The Tenant of Wildfell Hall followed although her hopes of becoming a respected writer was darkened by the death of her brother Branwell in September of 1848 and Emily in December of 1848. Anne soon caught tuberculosis and although she knew she was gravely ill she had dim hopes that the sea air of her beloved Scarborough would prove curative. She travelled there in the spring with Charlotte and their friend Ellen Nussey. At the age of twenty-eight she died there at peace on 28 May 1849. She now rests in St. Marys churchyard, with a view of the sea. In her grief, Charlotte, who lived for another six years wrote On the Death of Anne Bronte.

Enjoy the blessings Heaven bestows,
Assist his friends, forgive his foes;
Trust God, and keep His statutes still,
Upright and firm, through good and ill;
Thankful for all that God has given,
Fixing his firmest hopes on Heaven;
Knowing that earthly joys decay,
But hoping through the darkest day.
Vanitas Vanitatum, Omnia Vanitas, Anne Bronte

What did the Brontes actually die from?

What did the Brontes actually die from? I have read that Branwell, Anne, Emily and, later, Charlotte all died from consumption. Consumption is usually taken to mean tuberculosis, but not necessarily. Any chest disease could be termed consumption. Friedrich Engels describes in The Condition of the Working Class in England how certain factory workers would die in their twenties from metal dust inhalation, which iirc was also decribed as consumption, but which sounded more like asbestosis. The life expectancy at Haworth was shockingly low, only 26 years. One reason for this was that the inhabitants got their drinking water from springs, which were contaminated by the rainwater soaking through t...

I just finished reading Anne Bronte's novel Agnes Grey. Am wondering why are her two sisters more famous than she is? Here prose are very sensitive and the novels meets all the criterial of plot requirements. Why don't her novels receive much more critical attention? Opinions please!...

Sorry to mislead you if you were expecting something about Anne Bronte. Actually it is something about Anne, but only indirectly. She is mentioned but only incidentally: Juliet Ashton wrote a biography of Anne Bronte. But it's all fiction in The Guernsey Literary and Potato Peal Society. So is The Guernsey Literary and Potato Peal Society, but it's real, a fiction by Mary Ann Shaffer and Annie Barrows. (ISBN: 978-0-385-3400-4). Juliet is fiction, so is Elizabeth, so is Kit. They exist only from the heart to a heart. It is a wonderful book. A quick read that will make you smile and laugh. If you have read it, I would like to hear from you....

Hello These days I am working on a project which deals with the Bronte's novels, I wanted to compare Rochester and Heathcliff and their romantic relationships, so I would like to hear some opinions about this. Thanks for the responders. :yawnb: ...

I have just completed Agnes Grey by Anne Bronte. Most people consider Anne to be the less talented of Bronte's but I after reading the novel, I found her writing style and the plot really great. Which Bronte sister appeal you the most? I liked Emily Bronte the most, then Anne Bronte and in the end, I liked Charlotte Bronte.... 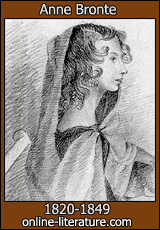 Here is where you find links to related content on this site or other sites, possibly including full books or essays about Anne Bronte written by other authors featured on this site.