Catherine Earnshaw, may you not rest as long as I am living! You said I killed youhaunt me, then! The murdered do haunt their murderers. I believeI know that ghosts have wandered on earth. Be with me alwaystake any formdrive me mad! only do not leave me in this abyss, where I cannot find you! Oh God! it is unutterable! I cannot live without my life! I cannot live without my soul!

First published under Emilys pseudonym Ellis Bell, the combination of its structure and elements of passion, mystery and doomed love as well as social commentary have made Wuthering Heights an enduring masterpiece. Set in 18th Century England when social and economic values were changing and land ownership did not always the man make, it is a world of patriarchal values juxtaposed with the natural elements. Bronte explores themes of revenge, religion, class and prejudice while plumbing the depths of the metaphysical and human psyche. Brontes own home in the bleak Yorkshire moors provides the setting for the at-times other-worldly passions of the Byronic Heathcliff and Catherine. Also having written much poetry, Emily Brontes works did not receive wide acclaim until after her death at the age of thirty. Wuthering Heights is still in print today and has inspired numerous television and feature film adaptations. As with most of the Bronte sisters popular novels, people have tried to find biographical parallels in them. Emily has been characterised to mythic proportions as deeply spiritual, free-spirited and reclusive as well as intensely creative and passionate, an icon to tortured genius.

In 1824, Emily, with her four sisters entered the Clergy Daughters School at Cowan Bridge, near Kirkby Lonsdale. When Maria and Elizabeth died there a year later of tuberculosis, she and Charlotte returned home to Haworth. Their father was a quiet man and often spent his spare time alone, so, the motherless children entertained themselves reading the works of William Shakespeare, Virgil, John Milton, and the Bible and played the piano, did needlepoint, and told each other stories. The four often paired up; Charlotte and Branwell started writing of their imaginary world Angria, Emily and Anne writing of its rival, Gondal. Penning their kingdoms histories and developing characters to populate them, the young Bronte girls found a creative outlet in writing stories and poetry. Emily was becoming an independent and opinionated young woman as her poem The Old Stoic reveals;

And if I pray, the only prayer
That moves my lips for me
Is, Leave the heart that now I bear,
And give me liberty!

In 1835 Emily enrolled at Miss Wooler's school at Roe Head, Mirfield where Charlotte was teaching, but she soon returned home when she became profoundly homesick and ill. After a few years as governess at Law Hill Hall in Halifax, West Yorkshire, Emily and her sisters Charlotte and Anne travelled to Brussels, Belgium in 1842. There at the Pensionnat Heger under teacher Constantin Heger they immersed themselves in the study of French, German and literature with the aim of starting their own school someday. When their Aunt Branwell died Emily alone returned to Haworth for her funeral and stayed on there, just her and her father. She helped around the home and continued writing and editing her poems. By 1845 her sisters had given up their dream of starting their own school and the three were together at Haworth again. It was Charlottes idea to publish the poems of Currer, Ellis and Acton Bell in 1846. The following year Wuthering Heights was published to mixed reviews, although it was soon lauded as an original and innovative tragic romance. Tragedy loomed large in Emilys life as well: her brother Branwell had become an alcoholic and addicted to opium and the family were constantly dealing with his depressions and at times mad ravings. He died in 1848 and while at his funeral Emily caught a cold and died soon after, on 19 December 1848. She now rests with her mother and father and sisters Charlotte, Maria, and Elizabeth and brother Branwell in the family vault at the Church of Saint Michael and All Angels in Haworth, West Yorkshire, England.

Yet, still, in evenings quiet hour,
With never-failing thankfulness,
I welcome thee, Benignant Power;
Sure solacer of human cares,
And sweeter hope, when hope despairs!To Imagination

wuthering heights is an amazing novel by Emily Bronte....

A few notes on Wuthering Heights

I'm doing a speech on Wuthering Heights in a few weeks & I thought the topic of my speech would be the modern diagnosis of Heathcliff & Cathy. I'm a literature fan but also am an Abnormal Psychology Major, so of course, I come up with a topic like this. :ihih: I want to know what your guys' opinions on my diagnosis is. I believe that Cathy has Histrionic Personality Disorder. Here is the Diagnostic Criteria: Histrionic personality disorder (HPD) is defined by the American Psychiatric Association as a personality disorder characterized by a pattern of excessive emotionality and attention-seeking, including an excessive need for approval and inappropriate seductiveness, u...

I was told by a teacher that there were two different sex scenes or sex references in Wuthering Heights before chapter 21. This teacher has yet to tell our class what they are yet, I was wondering if anyone already knew what she might be talking about? I have yet to find them myself and I have searched multiple forums and articles online and none of them mention anything about two "sex scenes" before chapter 21....

the tune of WH

hi my doctor asked us to make a research about the tune of WH i need help please:rolleyes5:...

I was thinking about this novel the other day, and thought that maybe the characters of Heathcliff and Cathy represent different sides of the economic spectrum. Heathcliff is a gypsy, at the very bottom of the social ladder, almost a pariah. He is an orphan/abandoned child, and gets a chance to raise his social status after being adopted by the Earnshaws. However, he becomes angry when the rich, represented by Cathy, remain just as aloof and indifferent to him after he becomes wealthy as before. Then, Cathy dies, thus symbolizing the destruction of the upper class, leaving Heathciff lost in grief. After Heathcliff's death the two are reconciled; implying that the only way the upper lower cl...

Dear everyone, Help me to find the answer of question Do you agree that Heathcliff is a tragic figure who evokes sympathy? Give reasons in support of your answer. Waiting for reply Jasvinder...

How did the romantic period in Englad affect the themeof the novel?

what did he mean? (heathcliff)

hey there, before heathcliff died he said he had to reach something (talked of struggling to reach a shore..metaphore thing) and that he was close to his aim... but what was this aim.. this chases me since I've finished the story. did he want to die to be united with cathy in death or did he want something else?? help me, take a look at the end of the story, remember the facts and tell me what you think .. thx:wave:...

hey girls... this is no sublime topic and no intellectual discussion .. I just want to know if I'm the only one who wished she could have jumped into the story to console heathcliff (or perhaps quarrel with him)... tell me if my taste in men is strange or if you share my opinion (I do apologise to all boys for most of them won't be able to say anything about this)...

Did any one catch Wuthering Heights on ITV over the bank holiday? It showed once again how good the BBC is at costume Drama. ITV should stick to soaps, game shows and the X factor.... 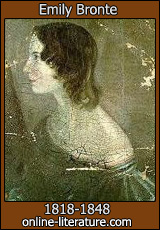 Here is where you find links to related content on this site or other sites, possibly including full books or essays about Emily Bronte written by other authors featured on this site.