Bret Harte (1836-1902), American author, essayist, humorist, and critic wrote The Luck of Roaring Camp (1870), one of his first and most successful works.

Francis Brett Harte was born on 25 August 1836 in Albany, New York, the son of a teacher, Henry Harte and his wife Elizabeth Ostrander. Young Frank was frail as a child due to ill health, and the family moved often on account of his father's profession in seasonal teaching positions. Frank turned to books as his favourite indoor pursuit, studying the Bible and reading Byron, Charles Dickens, and Edgar Allan Poe among others. After his father's death the family moved to Oakland, California in 1853. His mother remarried, to Colonial Andrew Williams. Harte taught for a while, and also worked in the mining industry.

The weekly newspaper Northern Californian was Harte's first exposure to journalism, editing, and writing. When drunken Union members murdered countless Wiyot Indian men, women, and children in the Gunther's Island Massacre in 1860, Harte lashed out in editorial rage and barely escaped with his life when the locals ran him out of town.

"Today we record acts of Indian aggression and white retaliation. It is a humiliating fact that the parties who may be supposed to represent white civilization have committed the greater barbarity."

Harte made his way to San Francisco where he was soon working as a typesetter and contributing poems, articles, and short stories for the journal The Golden Era. He started signing his works as "Bret" or "The Bohemian". The income was barely enough to survive, and he ended up landing the position of superintendent's secretary of the United States Mint. The same year, 1862, he married Anna Griswold with whom he'd have four children. His position with the Mint afforded him much time to pursue his writing as a freelancer. He was a staunch pro-Union supporter of Abraham Lincoln and was allowed the freedom of expression he believed in so heartily, though a number of social blunders later on would cost him dearly.

Harte expanded his literary scope with many items published in the The Californian, a slightly more sophisticated journal featuring serials, illustrations, poetry, political essays, satire, and parodies of other author's works. Much of his work was based on life in the Californian mining camps, though he also wrote many sardonic items such as "Neighborhoods I Have Moved From; by a Hypochondriac". He also tried his hand at book reviews, plays, and literary criticism. The Lost Galleon and Other Tales (1867) was one of his first major works. The same year he became editor of the literary journal The Overland Monthly where his famous stories of "The Luck of Roaring Camp" (1870) brought him widespread fame. Plain Language from Truthful James (1870) followed. He was no sooner a member of the literati in San Francisco when he and his family decided to head east again and settled in Boston.

His well-earned positive reviews and accolades preceded him and he was soon well-acquainted with New England authors Ralph Waldo Emerson and Henry Wadsworth Longfellow, among others. It also greatly helped that the journal Atlantic Monthly had contracted him for a year's worth of writing with a whopping advance of $10,000. He fulfilled his end of the deal finally though he was often late in submitting articles and his publisher William Dean Howells was not impressed. And his readers were turning elsewhere. After moving to his native New York to write freelance, his novel Gabriel Conroy (1876) and his collaboration with Mark Twain on the play Ah Sin (1878) proved unsuccessful in providing adequate income for the Harte family. He and Twain quarrelled bitterly amid rumours of his belligerence, spendthrift habits, drinking, and womanising which would haunt him for years to come.

Harte had mastered the genre of gold rush fiction, capturing the corruption and greed in nostalgic prose, with vivid descriptions of the myriad characters he had known and the wild new frontier lands he had traversed. However he would never quite maintain the impetus of his first published successes. His financial stresses took a turn for the better when in 1878 he was recommended and duly appointed to the United States Consul, first in Crefeld, Germany, then Glasgow, Scotland until 1885. The strain was still there however as it was not lucrative enough to support Anna and the children joining him in Europe. After his service he spent the majority of his latter days in London. He mostly wrote in the same format as his early days but even when testing new material his audience was tiring of his romanticising. Drift from Two Shores (1878), Poetical Works (1880), In the Carquinez Woods (1883), Maruja (1885), The Queen of the Pirate Isle (1886), The Crusade of the Excelsior (1887), and The Argonauts of North Liberty (1888) were many of his prolific titles to follow.

Francis Brett Harte died of throat cancer on 5 May 1902 at the Van de Velde estate in Camberley and lies buried in St. Peter's churchyard, Frimley, England. The gravestone is etched with one of his own poems "Death Shall Reap the Braver Harvest."

I found a poem written by Bret Harte entitled "Dickens in Camp" in an old school primer "For Use in the Lower Grade". Shall I share the poem? /tlj...

Hi everyone...I posted before on the main site, but never received an answer. I've been searching for YEARS for a poem by Bret Harte called "Sister's Beau" or as I knew it in school..."My Sister Will be Down in a Minute." I won an elocution contest in 1918 in Albany, New York by reciting this poem, but have forgetten some lines and would like to find this poem in its entirety. I can give you SOME of the lines: My sister will be down in a minute And says you may wait if you please And says I may stay here with you If I promise her never to tease Nor speak til you spoke to me first But that's nonsense.. Why how would you know just where to sit? That chair hasn't any springs ... 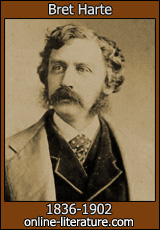 Here is where you find links to related content on this site or other sites, possibly including full books or essays about Bret Harte written by other authors featured on this site.