As one of the first women to make a career of crafting western stories, Bower's granddaughter Kate Baird Anderson has worked to keep her memory alive. Bertha Muzzy Sinclair was born 15 November 1871 in the state of Minnesota. The Bower family headed west to Montana in 1888 where Bertha became a teacher in Grand Falls. Her first husband's name was Clayton J. Bower, whom she married at the age of nineteen.

Around 1900 Bower started to pen short stories, but her novel Chip of the Flying U was her first commercial success and is still said to most representative of her work. "Bleak" Cabin, near Big Sandy in Montana is where she wrote it. In Flying U the Old Man's daughter, who just became a doctor, is coming to stay for the summer, and causes a lot of uproar among Chip and the rough and tumble cowhands who work on the range, the `badlands' at the edge of the Rocky Mountains in `BearPaw' country. Illustrations for many of her novels were done by Bower's friend Charles (Charley) Russell. On 12 August, 1905, Bertha married her second husband Bertrand W. Sinclair. They travelled to a number of different states, including New Mexico, California and Idaho.

The Happy Family (1910) continues the family story introduced in Chip of the Flying U including Andy, Weary, Irish, Pink, Happy Jack and Big Medicine. Between 1906 and right up until Bower's death in 1940 she wrote a total of sixty-eight novels. They are all set in the American west, artfully capturing the frontier spirit of cowboys and ranching and their interactions with Sioux Indians, Sheriffs and outlaws, robbers and gold prospectors.

In Cabin Fever (1918) Bud Moore enters into a life of adventure and soul-searching when he partners with a prospector in the wilderness, sharing a tiny cabin only to have a child change both of their destinies. The Flying U Ranch (1914) continues the tales of the family introduced in Chip of the Flying U and in The Flying U's Last Stand (1915). In Jean of the Lazy A (1915), Jean becomes an actress and saves money in order to exonerate her father from a charge of murder. It caught the attention of film makers and was adapted for the screen in the movie "Ridin' Thunder" (1925), a silent western starring Jack Hoxie.

B.M Bower had a gift for weaving tales of romance and adventure, intrigue and mystery, often with surprise endings. They are historical reminisces of pioneers among the sage and bush, clearing the way for a new life. She herself lived on a Montana ranch, and her personal wide-ranging travels and respect for nature were inspiration for her work. She knew and loved the tireless young men who worked their hearts out in the only way they knew how to. The themes of divorce and spousal abuse were subjects she was not afraid to address. She captured in authentic detail and charm the spirit and lives of the men and women of her times who fought so hard for justice and honour among the harsh reality of their surroundings. 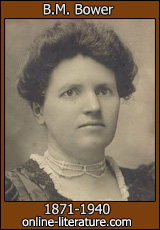 Here is where you find links to related content on this site or other sites, possibly including full books or essays about B.M. Bower written by other authors featured on this site.