William Blake (1757-1827), English artist, mystic and poet wrote Songs of Innocence (1789): a poetry collection written from the childs point of view, of innocent wonderment and spontaneity in natural settings which includes Little Boy Lost, Little Boy Found and The Lamb;

Songs of Experience (1794) contains many poems in response to ones from Innocence, suggesting ironic contrasts as the child matures and learns of such concepts as fear and envy. For example, to The Lamb comes the predatory The Tyger;

And what shoulder, and what art,
Could twist the sinews of thy heart?
And when thy heart began to beat,
What dread hand? and what dread feet?

What the hammer? what the chain?
In what furnace was thy brain?
What the anvil? what dread grasp
Dare its deadly terrors clasp?

When the stars threw down their spears,
And watered heaven with their tears,
Did he smile his work to see?
Did he who made the Lamb make thee?

Later editions would see Innocence and Experience contained in one volume. As a friend of Mary Wollstonecraft Shelley, Percy Bysshe Shelley and Thomas Paine, Blake was among the literati of Londons intellectual circle though he was often labeled an eccentric or worse, insane or demented. His works did not gain much acclaim or commercial success until long after his death. Although he had several patrons over the course of his life and produced voluminous works, he often lived in abject poverty. Though it is hard to classify Blakes body of work in one genre, he heavily influenced the Romantic poets with recurring themes of good and evil, heaven and hell, knowledge and innocence, and external reality versus inner. Going against common conventions of the time, Blake believed in sexual and racial equality and justice for all, rejected the Old Testaments teachings in favour of the New, and abhorred oppression in all its forms. He focused his creative efforts beyond the five senses, for, If the doors of perception were cleansed every thing would appear to man as it is, infinite. For man has closed himself up, till he sees all things thro narrow chinks of his cavern.from The Marriage of Heaven and Hell written between 1790-93, which inspired the title of Aldous Huxleys essay The Doors of Perception (1954).

As an artist Blake admired and studied the works of Raphael, Heemskerk, Dürer, and Michelangelo, who would become important influences to the fantastic and at times apocalyptic illustrations he created for his own writings and others. From his c.1803 poem The Mental TravelerI traveld thro a Land of Men, A Land of Men & Women too, And heard & saw such dreadful things, As cold Earth wanderers never knew. He developed mythic creatures inspired by Greek and Roman mythology including Los, who represents the poetic imagination; Albion, who represents England; and Orc, who embodies youthful rebelliousness. His illustrations for the Bibles Book of Revelations include The Great Red Dragon (Satan) made famous most recently in Thomas Harris novel Red Dragon (1981). While Blake lived the majority of his life in London, he exerted a profound impact on future poets, artists, writers, and musicians the world over.

William Blake was born on 28 November, 1757, in London, England, the third son of Catherine née Wright (17231792) and James Blake (c.17231784) a hosier and haberdasher on Broad Street in Golden Square, Soho. Young William was prone to fantastic visions, including seeing God, and angels in a tree. He would later claim that he had regular conversations with his deceased brother Robert. It was soon apparent that Blakes internal world of imagination would be a prime motivator throughout his life. Noting something special in their son the Blakes were highly supportive of and encouraged his artistic creativity and thus began his education and development as an artist.

He had early shown an interest in and aptitude for drawing, so, at the age of ten Blake entered Henry Pars drawing school. Then, at the age of fourteen Blake started a seven year apprenticeship with engraver James Basire, the official engraver to the Society of Antiquaries. From his bustling shop on Queen Street, Blake learned all the tools of the trade that would become his main source of income. He was often sent out on assignments to create sketches and drawings of statues, paintings, and monuments including those found in churches like Westminster Abbey. The intense study of Gothic art and architecture appealed to Blakes aesthetic sensibility and brought out his penchant for the medieval. He also met numerous figures from Londons intellectual circle during this period. After attending the Royal Academy under Sir Joshua Reynolds for a time Blake left because he found the intellectual atmosphere there too restrictive to his burgeoning artistic side. In 1780 he obtained employment as an engraver with publisher Joseph Johnson.

In 1782 Blake married Catherine Sophia Boucher (1762-1831). Although they had no children it was mostly a happy marriage and Blake taught Catharine to read and write. They were a devoted couple and worked together on many of Blakes publications. He had been writing poetry for quite some time and his first collection, Poetical Sketches, appeared in 1783. While Blake was busy with commissions he also undertook the task of creating the engravings that would illustrate his own poetry, and he also printed them himself. He experimented with an early method of creating images and text on the same plate. His highly detailed illustrations often focus on parts of the human anatomy or fantastically imaginative creatures surrounded by various natural forms. Often tackling difficult metaphorical themes, his characters embodying inspiration and creativity do battle with oppressive forces like law and religion. He employed techniques for decorative margins and hand-coloured the printed images, or printed with the colour already on the wood or copper plate, the paint of which he mixed himself. This attention to the craft and details of each volume make no two of his works alike. He also illustrated works for other writers and poets including Mary Wollstonecraft Shelleys Original Stories from Real Life (1788).

In 1800, the Blakes moved to Felpham in Sussex where William was commissioned to illustrate works by his then patron, poet William Hayley. In 1803 Blake was charged with sedition after a violent confrontation with soldier John Scolfield in which Blake uttered treasonable remarks against the King. He was later acquitted. In 1805 he started his series of illustrations for the Book of Revelations and various other publications including Geoffrey Chaucers 14th Century Canterbury Tales, Robert John Thorntons Virgil and John Miltons Paradise Lost. Milton: A Poem was published around 1811. Jerusalem: The Emanation of the Giant Albion (c.1820) is Blakes longest illuminated work.

In 1821 the Blakes moved to lodgings in Fountain Court, Strand. There he finished his work on the Book of Job in 1825, commissioned by his last patron John Linnell. The following year he started a series of watercolours for Dante Alighieris Divine Comedy, which he worked on up to the day of his death. William Blake died at home on 12 August, 1827. Unable to pay for a funeral, Linnell loaned the money to Catherine. Blake was buried in an unmarked grave in the Non-Conformist Bunhill Fields in London where Catherine was buried four years later among other notable figures of dissent like Daniel Defoe and John Bunyan. A grave marker now stands near to where they were buried. In 1957 a memorial to Blake and his wife was erected in Poets Corner of Westminster Abbey, London.

I must create a system, or be enslavd by another mans. I will not reason and compare: my business is to createJerusalem

I remember buying some blake tarot cards in Southampton England and I was looking at the cards on the train blake was probably ahead of his time like his was there before Crowley or jagger or lennon or axl rose...

I'm looking for recommendations on Blake biographies. I've recently become fascinated with his illuminated books, and I want to know more about this genius!...

Im in need of help .... Active Evil is better than Passive Good. William Blake what does this quote mean ?!?! pleassee :)...

Here's a collection of poems by William Blake narrated with the full text of the poem included. One can understand that the way a poem is read has great affect on it's understanding. Not only can the text be found in this channel, so one can assert their own interpretation on it, but also hearing a narration of it can stem perspectives into other ground. Here is the youtube channel: http://www.youtube.com/PoetRead...

Hello, I'm a university student currently working on a research paper on William Blake, particularly focusing on The Marriage of Heaven and Hell. I plan to argue against critics who say that Blake is a non-conformist, and would like to get some opinions from people on this discussion group, and possibly some of your favorite critics arguing for or against my opinion (against will make it more fun and interesting)....

" The New Jerusalem" is perhaps the best known of Blake's poems--a famous anthology piece, which really gives the impression of both scope and power. It is also one that has been misunderstood and perhaps misinterpreted. Though when Jesus Christ was incarnate as man in Palestine, he certainly never visited England. Blake imagines that God Himself in Christ must have walked upon the mountains of England, and delighted in its pastures. What he implies by this is that true religion did exist in England in " ancient times", and hence the holy city Jerusalem was indeed symbolically built in England. Now, however, the dark Satanic Mills of Reason ]have come up like mushrooms, and the holy c...

The Marriage of Heaven and Hell help!!

I need some help interpreting this poem. I need to find all the examples of Blake's mental fight against compromise, hypocrisy and authoritarian impositions. I need to take it section by section, so can anyone walk me through it in relation to the question? I'm feeling pretty lost!:brickwall...

Hello, I'm translating a page from Japanese to English and a quote from William Blake came up and I'm having trouble locating the exact quote in English so I was wondering if someone here could help me out. The text is: "自分を愛するように他を愛する者はありません" And it roughly translates as "To love oneself is to love no one else." Thanks a lot for any help, dm10...

Hello - I have to write an essay on Blake's The Marriage of Heaven and Hell, and how he uses the theme "energy is eternal delight" throughout the text. I have some ideas about the contraries energy/reason, good/evil etc. I'm wondering if anyone has any suggestions for other ideas I could include in my essay?...

The chimney sweeper by william blake

Anyone read the chimney sweeper, the one in the songs of innocence, by william blake? What do you think the effect of the religious imagery and other literary techniques in the poem was to create meaning towards work? :)...

Writing a research essay on Blake's Marriage of Heaven and Hell. Just wondering about others think about the Proverbs of Hell to be specific.... 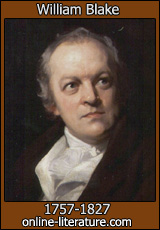 Here is where you find links to related content on this site or other sites, possibly including full books or essays about William Blake written by other authors featured on this site.