Benito Pérez Galdós was born at Las Palmas in the Canary Islands, May 10, 1845. The details of his early life are entirely unknown except to himself, his invincible modesty denying them even to personal friends like the writer of the only biography of him (a meagre one) that has appeared, Leopoldo Alas. He studied in the local Instituto, and must have profited by his opportunities, for the literary attainments shown in his novels can have resulted only from persistent labor from youth up. In 1863 he went to Madrid to study law in the University, but with little eagerness for his future profession. He already dreamed of a literary career, and tried the hand of an apprentice at journalism and at pieces for the theatre, none of which, happily, as he has since said, was represented. In 1867, his mind being engaged at once by the revolutionary agitation of his own time, and by the similar interest of the still more violent upheaval in Spain in the first years of the century, he began a kind of historical novel, _La Fontana de Oro_, in which he undertook to study the inner motives and history of that period, so all-important for modern Spanish history, and to illustrate the detestable character of Ferdinand VII as it appeared in one of his most disgraceful moments. It was four years, however, before the book was completed and published. During this time Galdós had visited France and had returned to Madrid by way of Barcelona, where he was when the Revolution of 1868, which deprived Queen Isabel of her throne, broke out. This he greeted with delight, believing the realization of his conservatively radical political views to be at hand; but he speedily found himself sadly disillusioned. In 1871 his novel appeared, making no sensation, but attracting the favorable attention of a few competent judges. The road was at last opened before him, and he pressed steadily on in it.

His imagination had now become deeply stirred by both the political and the social aspects of the great period of the awakening of Spain, when, to begin with, she freed herself by heroic efforts from the Napoleonic tyranny, and then made her incipient advances towards modernity in the face of the opposition of the representatives of her traditional religion and of her outworn social order. In 1872 he had completed a second novel, _El Audaz_, in which a phase of the struggle earlier than that studied in _La Fontana de Oro_, was his theme. Then, taking a suggestion perhaps from the success of the historical novels of Erckmann-Chatrian, he began a succession of consecutive tales, _Episodios Nacionales_, as he called them, which, in two series, cover the whole agitated time from the Battle of Trafalgar in 1805 down to the death of Ferdinand VII in 1833. Each series has its hero, whose fortunes afford a slender thread binding the tales together, and whose participation in the successive events or crises of the War of Independence and of the reign of Ferdinand VII enables the author to give these events their proper setting in the political and social movements of the period. Naturally, there is great inequality in the execution of so long a list of tales (twenty in all), and the reader's attention at times flags. Yet the care with which Galdós studied his material, acquainting himself with the minutest details of the history of the time, and the skill as a narrator that rarely fails him, make the _Episodios Nacionales_ incomparably the best documents in which to obtain a true understanding of one of the greatest movements in the life of a great and interesting nation.

Before he had concluded the _Episodios Nacionales_, however, Galdós had begun to feel the attraction of an even deeper and more significant movement,--that of the modernization of the Spain of the present day. Here, to be sure, the situations are less famous and picturesque, the part of action is diminished, and patriotic emotion is less evoked; but the struggle to be studied is none the less violent and profound. For readers of our time this struggle perhaps gains in interest from being rather inward than outward, and from demanding of him who paints it rather a study of souls than the delineation of stirring events. In few countries has the clash between the new and the old been so violent, or the adjustment to the new produced so many and so startling incongruities as in Spain. The deadly antagonism of the traditional religious and social feeling of the race towards the whole modern manner of thinking, the ruinous effects of a first taste of modern luxury upon those who come ignorantly and blindly under its spell, the agitations of minds whose moral continuity has been broken by ill-understood freedom of speculation, the disasters produced by political or social ambitions aroused in those grotesquely unfit for their attainment,--in short, the illusions, the vain hopes, the failures, the despairs, the hates, the woe which every great movement of the _Zeitgeist_ inevitably causes in every nation, these are the themes which Galdós has of late found irresistibly attractive, and to which he has devoted much the richest and strongest part of his work.

The first novel in which the new interest was predominant was the present book, _Doña Perfecta_, finished in April, 1876. In it Galdós brought the new and the old face to face: the new in the form of a highly trained, clear-thinking, frank-speaking modern man; the old in the guise of a whole community so remote from the current of things that its religious intolerance, its social jealousy, its undisturbed confidence and pride in itself must of necessity declare instant war upon that which comes from without, unsympathetic and critical. The inevitable result is ruin for the party whose physical force is less, the single individual, yet hardly less complete ruin for those whom intolerance and hate have driven to the annihilation of their adversary. The sympathies of the author, as his closing sentence shows, are with the new, but his conscience as artist has none the less compelled him to give to the old its right of full and fair utterance. 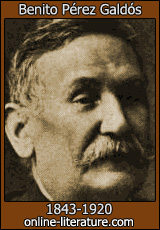 Here is where you find links to related content on this site or other sites, possibly including full books or essays about Benito Pérez Galdós written by other authors featured on this site.