Her books have been translated to braille and numerous languages including German, Latin, Welsh, Spanish, French, Japanese and Dutch. Many are still in print and beloved world-wide. Helen Beatrix Potter was born on 28 July 1866 in South Kensington, London, England. Her parents were Helen Leech and Rupert William Potter. Even as a young girl Beatrix, as she was known, loved animals enough to secret them away into the house including rabbits, frogs, kittens, hedgehogs and mice. A bout with rheumatic fever would affect her heart and health for the rest of her life. Though she was quite shy, she was a very creative girl, encouraged by her parents and governesses who taught her to paint and draw. She also kept a journal which illuminates her highly imaginative and sensitive nature.

The Potter family spent many summers in the Scottish Highlands and the Lake District of England where Beatrix and her brother Bertram immersed themselves in the natural world, which became a life-long passion and subject of intense study for Potter. She explored the varied geography and flora and fauna, recording her observations of the landscape, fossils, insects, fungi, birds, flowers and animals in sketches, drawings, and watercolours. She also made the acquaintance of a kindly Vicar and writer, Hardwicke Rawnsley, who was also a lover of the Lakeland and advocated for its preservation. He would become a great supporter and mentor to her in her future life as writer.

Whilst in London living with her parents and governess Beatrix would visit the Museum of Natural History to sketch and continue her studies though it was sometimes frowned upon that a woman was pursuing such studies. When she was away from home visiting the countryside she wrote some short stories and greeting cards for her governesses' children, and one of them formed the basis of her first book, The Tale of Peter Rabbit (1902). Young and mischievous, Peter gets into various binds with Mr. McGregor, who happens to have a lush garden full of fresh carrots.

When the royalties started coming in Potter purchased property, then Hill Top farm in Sawrey, where she raised Herdwick sheep and increasingly spent her time, though she would still visit with her elderly parents in London. On 15 October 1913 Potter married the country solicitor William Heelis. Potter continued to increase her lands and write books at Hill Top, the quaint stone home, lush gardens and surroundings the setting for so many of her stories. Today it is still visited by many admirers of her classic childhood tales. Potter often submitted her stories to children first to 'test' them before publishing. She worked her finely detailed illustrations in pen and ink, pencil, watercolours, and oil.

Helen Beatrix Heelis died on 22 December 1943. After cremation her ashes were scattered over her lands. Her vast estate of thousands of acres was left entirely to her husband, whereupon his death it was bequeathed to the National Trust. The Beatrix Potter Society was founded in 1980.

BEATRIX POTTER: The Fulfilment Not of Fact But of Fancy

I was not an enthusiastic reader as a child, say, 4 to 12 years old, nor in my early adolescence(13-15) for that matter. I read what I had to in primary school and poured my energies first into simple playing and then after the age of 9 organized sport. I was also keen on trying to make money and then I was more keen after making some. Watching TV was a big event from the age of six to nine until my mother sold this lighted chirping box. Listening to music was central to my life as far back as I can remember. Having fun with my friends as far back as I can remember from, say, 1947 at the age of 3 to puberty in 1957 was part of who I was back then. I began to attend meetings with my paren...

I used to love to read Beatrix Potter when I was little. I still do, actually. How many other people out there used to loved to read her or have her read to them and what's their favourite story?... 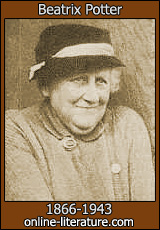 Here is where you find links to related content on this site or other sites, possibly including full books or essays about Beatrix Potter written by other authors featured on this site.