Bayard Taylor was born on 11 January 1824 in the village of Kennett Square in Chester County, Pennsylvania. His Quaker parents were farmers Joseph Taylor and Rebecca Way. At an early age Bayard felt the need to expand his horizons beyond the small village of merely one crossroads.

He studied languages and literature and started to write poetry, his first published in Philadelphia's Saturday Evening Post in 1841. Taylor was a voracious reader, and had written to Charles Dickens, one of his favourite authors, requesting his autograph, of which the esteemed writer complied, much to his delight. Whilst apprenticing with a printer, he became acquainted with Rufus Griswold, editor of Graham's Magazine and by his encouragement and support, Ximena; or the Battle of the Sierra Morena and Other Poems (1844) was published. It was highly lauded and by this foothold in the literary world, Taylor set out from his rural confines to travel the world on contract to write for the Saturday Evening Post, the United States Gazette and the New York Tribune.

With a cousin and friend, he set sail on the packet ship Oxford for Liverpool in 1844 for a tour of Europe. He travelled through England, Germany, and Italy, purportedly living on six cents a day. Views Afoot; or, Europe seen with a Knapsack and Staff (1846) is a compilation of all the articles he wrote during the two years, which had been widely read and highly entertaining to his readers. It would prove to be a long-standing success with a number of reprints over the next thirteen years.

Upon returning to Kennett Square, Taylor and Mary S. Agnew became engaged. Looking to secure an income so as to be marriage-worthy in the eyes of Mary's parents, he moved to New York in 1847 and obtained an editing position with the New York Tribune which would turn out to be a life-long association with the newspaper. Rhymes of Travel, Ballads, and Poems was published in 1848 and further entrenched his reputation as a poet. His next travel adventure was sailing to California to report on the Gold Rush for his friend Horace Greeley's New York Tribune. Eldorado, or, Adventures in the Path of Empire (1850) was the result and became a best-seller. Mary, with her increasing weakness due to tuberculosis, maintained an intense correspondence with Bayard whilst he was away, and they married upon his return on 24 October, 1850. She died on 21 December 1850, just two months later.

A Book of Romances, Lyrics, and Songs (1851) turned out to be one of Bayard's most popular compilations. He set sail with his brother William for Europe that same year, visiting England, Austria, Egypt, and China. Poems of the Orient (1854) includes The Bedouin Song one of his most enduringly popular poems. Bayard's popularity generated by his Tribune articles launched him into the spotlight and invitations for appearance as lecturer poured in, and his stage presence and exciting adventures did not disappoint. His next tour of Europe, Sweden and the Arctic, Germany and England, included a visit with Lord Alfred Tennyson. Northern Travel: Summer and Winter Pictures of Sweden, Denmark, and Lapland was published in 1857. Taylor had travelled with his friend August Bufleb, and he returned with him to his home in Gotha, Germany whereupon he met Marie Hansen, and on 27 October 1857 they married, deciding to stay in Europe whilst America was in the throes of financial panic and to await the birth of their daughter Lilian. The family returned to America a year later.

Soon after settling, Taylor started plans to build "Cedarcroft", his estate just outside of Kennett Square. Ralph Waldo Emerson and Horace Greeley were among the illustrious guests who were invited to its opening in 1860. Taylor continued his lecture tours, and to write poetry and articles for the Tribune, especially as Washington correspondent during the Civil War. He accepted the position of Chargé d'Affaires under the American minister to Russia at St. Petersburg. The American president Abraham Lincoln attended one of his lectures on Russia in 1863.

Hannah Thurston; A Story of American Life (1864), a novel which Nathaniel Hawthorne especially liked, was Taylor's first, followed by John Godfrey's Fortunes; Related by Himself (1864) and The Story of Kennett (1866). Colorado, a summer trip (1867) was based on one of the last travels Taylor did. He was becoming more and more settled at Cedarcroft, which afforded him much relaxation and focus for his writing, though it was financially a stretch to maintain at times. He was steadily working on one of his most respected works, a translation in original meters of Goethe's Faust (2 vols., 1870-71).

In 1869 he accepted a professorship with Cornell University, lecturing on such German literary notables as Goethe, Lessing, and Schiller. Joseph and his Friend; a story of Pennsylvania (1870) was his last published novel, and not a success. The Taylor’s set sail for Europe again, and upon return to America decided to relocate to New York.

Prince Deukalion: A Lyrical Drama was Taylor's last poem that he struggled to finish whilst fending off the strains his literary life had on his time and energies. With plans already underway to write biographies of Goethe and Schiller, coincidentally he was appointed U.S. minister to Germany. He travelled to Berlin in 1878, aboard the same ship Mark Twain was on, who had developed a friendly affection for Taylor. He never quite revived his spirit of adventure and travel in Germany however and a liver condition was sapping his spirit. Bayard Taylor died on 19 December 1878 in Berlin. His remains were sent back to New York to lie in state in the Governor's Room of City Hall, then sent on by train to Kennett Square, where he lies buried in the Longwood Cemetery, Pennsylvania.

The Bayard Taylor Memorial Library Association was established in 1895. 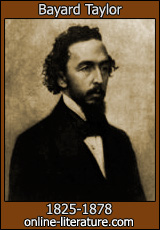 Here is where you find links to related content on this site or other sites, possibly including full books or essays about Bayard Taylor written by other authors featured on this site.