William Benjamin Basil King was born 26 February, 1859, in Charlottetown, Prince Edward Island. He had a stormy childhood and strict religious upbringing, alluded to in his The Conquest of Fear (1921), inspired by his fears of becoming blind. As an adolescent who had already for some years been losing his sight along with having thyroid gland problems, the young King was deemed not fit for work. He spent a lonely and melancholy autumn at Versailles in France, unoccupied and alone with his introspection and agonising over his fears of fate dealing him a bitter blow, a total loss of vision.

In 1881 he graduated from the University of King's College in Nova Scotia and two years later married Esther Foote. 1884 saw him ordained as Anglican priest and he served as the rector of St Luke's Cathedral in Halifax. In 1892 he became the rector of Christ Church, Cambridge, Massachusetts, yet in 1900 was forced to resign as a result of further failing eyesight. He would devote the rest of his life to literature.

A major turning point in King's life came from a teacher who spoke of the ingenuity and adaptability of the life-principle, which had somehow arrived on earth and for eons had continually met adversity and remained undefeated. King realised he was allowing his own wealth of ability to lie fallow. He rose to the challenge but still struggled with the seeming fate of Nature and his own untapped spiritual faith. He needed to heed his own advice: "Be bold-and mighty forces will come to your aid."

King took up writing while in Paris and he also spent enjoyable seasons in New York, Boston, Nice, Cannes, Munich, London, and Berlin. He believed in spiritualism and that a spirit personality guided his writing. "It is my blood, my breath, my brain." Among his first publications were The Inner Shrine (1909), The Wild Olive (1910), and The Street Called Straight (1912).

The High Heart (1917) is about the struggle of a Halifax, Nova Scotian girl trying to be accepted into New England high society. The Dust Flower (1922) is about the contrast between upwardly mobile Canadians in New York and the poverty of immigrants. King had several best-sellers, almost all of them set in the United States, but with Canadian characters.

With his thyroid problem getting better and his loss of vision arrested, King returned to Massachusetts, his adopted home, bought a house and settled down. He continued writing though over time his worries and fears of failure consumed him. He had some misunderstandings with who he thought were friends and ultimately became depressed again. Two years of his life under the pretence of working hadn't amounted to much in his estimation. "Suspicion always being likely to see what it suspects, the chances were many that I was creating the very thing I suffered from."

King was going to sell his house and turn to travelling again but he suddenly had a metanoia of sorts: he realised his role in life was not in trying to control fate to avoid his worst fears but to put his trust in and work together with God. He returned to writing and under this spiritual release it came easily, The Conquest of Fear a result where he discusses at length his Caucasian concept of God:

"I am all right," is the unspoken thought in many a heart, "so long as I am not overtaken by the Will of God. When that calamity falls on me my poor little human happiness will be wrecked like a skiff in a cyclone." This is not an exaggeration. It is the secret mental attitude of perhaps ninety percent of those Caucasians who believe in a God of any kind. Their root-conviction is that if God would only let them alone they would get along well enough; but as a terrible avenging spirit, like the Fury or the Nemesis of the ancients, he is always tracking them down. The aversion from God so noticeable in the mind of to-day is, I venture to think, chiefly inspired by the instinct to get away from, or to hide from, the pursuit of this Avenger." "Fear was not overcome; I had only made a more or less hesitating stand against it; but even from doing that I got positive results."

"My small experience in the conquest of fear can be condensed into these four words: Calmly resting! quiet trust!"

Basil King was one of the founders of the Canadian Authors Association.

CD era finally ended, from March to play in May the first, bought a total of 15 CD, one to put three hours, is a rare track, it seems my taste in music literature with style has changed too much, ha ha ha ha ! e-mail sent, Stojakovic, modern Liu Chuanfeng, not only the face as the ball is more like the wind, really admire the Japanese virtual world, even the Mavericks coach coach are related to exactly the same tomb south are devil's hair still the same points, are This world is really like, like Nietzsche said, "forever transmigration" it? Availability may read like writers with their own mass discipline those books ...... Oh, do not want to send, and plan a genius plan, that is to put no l... 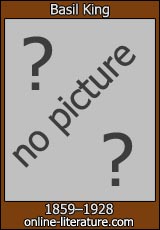 Here is where you find links to related content on this site or other sites, possibly including full books or essays about Basil King written by other authors featured on this site.