James M. Barrie (1860-1937), Scottish author and dramatist, best known for his character Peter Pan. Peter Pan or, The Boy Who Would Not Grow Up was first performed in 1904;

All children, except one, grow up. They soon know that they will grow up, and the way Wendy knew was this. One day when she was two years old she was playing in a garden, and she plucked another flower and ran with it to her mother. I suppose she must have looked rather delightful, for Mrs. Darling put her hand to her heart and cried, "Oh, why can't you remain like this for ever!" This was all that passed between them on the subject, but henceforth Wendy knew that she must grow up. You always know after you are two. Two is the beginning of the end.--Ch. 1

Other titles in the Peter Pan series are; The Little White Bird: or, Adventures in Kensington Gardens (1902), Peter Pan in Kensington Gardens (1906), When Wendy Grew Up: An Afterthought (1908), and Peter and Wendy (1911). The ever popular characters of Peter, Wendy, Tinker Bell, The Lost Boys, Captain Hook, and the other pirates fairies have inspired numerous adaptations to the stage, television, and film. The 2004 film “Finding Neverland” is based on Barrie’s life, starring Johnny Depp as Barrie.

James Matthew Barrie was born on 9 May, 1860 in the burgh of Kirriemuir, Angus, Scotland, the son of weaver David Barrie and his wife Margaret Ogilvy. They were a large family and James, short in stature at 5 feet 1 inch, had three brothers and six sisters. His brother David died at the age of fourteen in a skating accident, and the profound sadness of his mother deeply affected young James. An active and theatrical boy, he loved to entertain and at a very early age was organizing plays and acting in them with his friends and siblings. He wanted to be a writer and loved to read including the works of Jules Verne and James Fenimore Cooper. James attended school in Kirriemuir before entering Edinburgh University, during the four years of which he had articles published in newspapers. He earned his degree of Master of Arts in 1882. He then obtained a job as a writer with the Nottingham Journal, and in 1885 moved to London, England.

Barrie was successful at freelancing and soon bringing in a modest income for himself. Auld Licht Idyls or “Old Lights”, stories based on life in Kirriemuir (the fictional 'Thrums'), and partly about the religious sect his mother belonged to, was first printed in 1888. Other titles in the 'Thrums' series are A Window in Thrums (1889) and The Little Minister (1891). Sentimental Tommy (1896) and Tommy and Grizel (1900) followed. In 1897 he published his tribute to his mother Margaret Ogilvy.

Barrie, ever popular, was now attracting the attention and friendship of such notable writers as George Bernard Shaw, H.G. Wells, Thomas Hardy, and Robert Louis Stevenson, whose adventure stories with swashbuckling pirates Margaret had read to Barrie as a child. Three Men in a Boat (1889) author Jerome K. Jerome was one of the many friends Barrie formed a cricket playing club with called the “Allahakbarries”, the name a combination of Barrie’s and the Arabic phrase meaning 'May the Lord help us'. Barrie also collaborated with fellow Scot and cricket player Sir Arthur Conan Doyle on the opera titled Jane Annie or, The Good Conduct Prize (1893). Though it was not successful their friendship was lifelong.

At Kirriemuir, on 9 July 1894, Barrie married actress Mary Ansell (1984-1950), who was starring in one of his plays. They honeymooned in Switzerland where they got a St. Bernard puppy which would later appear in Peter Pan as the children's nanny. They lived at Black Lake Cottage, which became a popular retreat for them and their friends. In 1908 Mary had an affair with novelist Gilbert Cannan (1884-1955) whom she married in 1910. Her and Barrie had divorced in 1909. James and Mary had no children of their own, but a few years after he married Barrie met and became good friends with Arthur Llewelyn Davies and his wife Sylvia and their five sons while out strolling in Kensington Gardens. He entertained George, Jack, Peter 'the original Peter Pan', Michael, and Nico with stories, basing his characters on them. He would later become guardian to the children after both their parents died of cancer. In 1978 Barrie inspired documentary "The Lost Boys", a BBC television series written by Andrew Birkin.

Barrie was knighted in 1913 and the same year he became rector of St. Andrews University where he delivered his famous address on `courage’. In 1922 he received the Order of Merit, and in 1928 became President of the Society of Authors. In 1929 he had a camera obscura built in Kirriemuir. Sir James Matthew Barrie died on 19 June, 1937 and lies buried in the Kirriemuir cemetery alongside his parents, sisters, and brother David.

Universally Mourned, his obituary was published in The Illustrated London News on 26 June, 1937. There are now many statues of Peter Pan including the one in Kensington Gardens. Ever the benevolent and caring figure towards children, one of Barrie’s last wishes was that any royalties from Peter Pan be rewarded in perpetuity to the Great Ormond Street Hospital for Sick Children in London, England, though there is now some complexities surrounding copyright. Barrie’s birthplace in Kirriemuir is now part of the Scottish National Trust.

Discuss the idea of the children in J.M. Barrie's time

children in J.M. Barrie's time were very controlled and could only escape through fantasy. Discuss this idea:crash:... 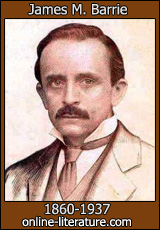 Here is where you find links to related content on this site or other sites, possibly including full books or essays about James M. Barrie written by other authors featured on this site.