“It is a truth universally acknowledged, that a single man in possession of a good fortune must be in want of a wife. However little known the feelings or views of such a man may be on his first entering a neighbourhood, this truth is so well fixed in the minds of the surrounding families, that he is considered as the rightful property of some one or other of their daughters.” —Chapter 1

Austen had rejected suitor Harris Bigg Wither at the last minute and never ended up marrying, but still she expresses a keen grasp of the traditional female role and the ensuing hopes and heartbreaks with her memorable protagonists including Emma Woodhouse, Fanny Price, Catherine Morland, Anne Elliot, and Elizabeth Bennett of Pride and Prejudice. Writing in the romantic vein, Austen was also a realist and has been lauded for her form and structure of plot and intensely detailed characters who struggle with the issues of class-consciousness versus individualism: self-respecting men were supposed to become lawyers or join the church or military, and respectable women married to improve their station in life.

Jane had started writing at an early age and her family were highly supportive, though as was done at the time her works were published anonymously. Her combination of irony, humour, and sophisticated observations of the societal and cultural machinations between the classes epitomise the often absurd problems of inheritance, courtship, morals, and marriage in Regency England. Modestly successful during her life, her works have gone on to inspire adaptations to the stage and film and have endured the test of time even into the 21st century.

Born on 16 December, 1775 Jane Austen was the daughter of Cassandra (née Leigh) (1739–1827) and the reverend George Austen (1731–1805). The Austens were a very close-knit family; Jane had six brothers and one sister, Cassandra, who would later draw a famous portrait of Jane. They lived in the village of Steventon in Hampshire county, England, where George was rector. Young Jane was tutored at home and attended the Abbey School in Reading, Berkshire.

Jane was inseparable from her older sister Cassandra. They sang and danced and attended balls together. When George retired around 1801, he moved his family to Bath where he died in 1805. Adjusting to the ensuing financial difficulties, Jane, Cassandra and their mother then moved to Southampton for a time before settling in a cottage on the estate of Edward Austen in the village of Chawton, Hampshire in 1809, which is now a museum. Austen had missed Steventon life and now returning to the Hampshire countryside she wrote in earnest, revising and writing new works including Sense and Sensibility (1811), Pride and Prejudice (1813), Mansfield Park (1814), and Emma (1815).

Possibly suffering from Addington’s disease, Jane Austen died on 18 July, 1817. She lies buried in the north aisle of the nave in Winchester Cathedral in Winchester, England.

In the Memory of
Jane Austen
youngest daughter of the Late
Rev.d George Austen
formerly rector of Steventon in this County
She departed this Life on the 18th of July, 1817,
Aged 41, after a long illness supported with
the patience and the hopes of a Christian

Posthumous publications were Persuasion (1817) and Northanger Abbey, a satirisation of Ann Radcliffe’s Gothic novels like The Mysteries of Udolpho (1794). Although Austen had many critics, among them Charlotte Bronte, Mark Twain and Lionel Trilling, she also had many admirers during her life and since, including the Prince Regent, Andrew Lang, Samuel Taylor Coleridge, Virginia Woolf, and Sir Walter Scott who wrote;

“That young lady has a talent for describing the involvements of feelings and characters of ordinary life which is to me the most wonderful I ever met with.”

This was the review of Emma by Sir Water Scott in which he praises Jane Austen's writing. He praises her well drawn characters, and her way of making ordinary events interesting. That's all very well, and generous of him, but look at the spoilers. He gives away the plot of Emma, Pride and Prejudice and Sense and Sensibility....

A new circumstance in romance. Is Jane Austen romantic?

I repeatedly hear it said Jane Austen is romantic. I suspect that is from people whove seen the films but not read the novels. OK, romanticism means different things, but how do you see her relationship to romanticism? For starters, here is a description of the hero falling in love in Northanger Abbey: I must confess that his affection originated in nothing better than gratitude, or, in other words, that a persuasion of her partiality for him had been the only cause of giving her a serious thought. It is a new circumstance in romance, I acknowledge, and dreadfully derogatory of an heroine's dignity; but if it be as new in common life, the credit of a wild imagination will ...

OK, Jane Austen enthusiasts, what do you think of Sanditon, the fragment of her last novel left unfinished at the death? I read it last winter. This evening I heard a programme on BBC Radio 3 which suggested if she had finished it, it would have changed the nature of the English novel. The theory was that it was a pair with Persuasion as both books are about risk. Im not at all convinced. Certainly it doesnt seem to be likely to be based so much on the formula of a young woman making a satisfactory marriage, and is more concerned with a satiric view of a society. But it seems crude to me compared to the earlier works. In them characters give themselves away in the co...

Can people outside the UK hear this? http://www.bbc.co.uk/programmes/b0076tq5...

I am in favour of digging Jane Austen up to be sure of her looks...

Only yesterday, before I closed my beautiful brown eyes I was determined to start a drive to open dear Jane Austens grave to decide for once what she looked like. Who joins me? Exhuming people is done all the time, why could not Jane?...

Jane Austin wrote a novel in the historical novel genre titled "Standish of Standish" why is it not listed with her works on this site? Not a P/C type book, is that it? I enjoyed reading it, maybe not the greatest bit of literature but deserves to be on the list, no? KDM...

Do you think that the book by Jane Austen, pride and prejudice, reflects the way we behave in Arabia? Explaination: Pride and Prejudice, is a book written by Jane Austen which was set in the early eighteen hundreds in England. Its a book which, in my opinion, reveals the strict moral code which the people of that time lived by, and which we follow in Arabia....

Yes, there is another sequel to Pride & Prejudice, but not one of the most straightforward kind. Firstly it is written by the revered P.D. James and secondly it is not foremost concerned with what happened after Lydia, Elizabeth and Jane finally got married. Despite its subject, the death of Captain Denny who also featured in the original, it keeps an odd balance between Austen’s world and characters and the investigation of the murder in its timeframe. As P.D. James is herself a fan of Austen, she has written her sequel with much respect for the three things that define a good Austen read: style, knowledge of the times and a world that is always smaller than one thinks at fi...

I am planning on reading Pride and Prejudice this spring or summer, maybe closer to summer, when I can devote more time to it. I have summers off, I work in a school. I have never read Austen, but cannot imagine neglecting to read her most famous book, being a classics fan! I have an interesting question, I hope. I am currently rereading Jane Eyre, which I LOVE!! I love the writing style; the formality of it, the suspense, and the wonderful narration by Eyre. I am wondering about a comparison in writing styles. I have not researched this, but as I am reading this book I can't help but anticipate reading Austen - the time period is not quite the same, but it is very close. I am thinking mayb...

good articles about Jane Austen and her world

I just began a college course called bibliography and research. The basic purpose of this course is to prepare the students for further college research and writing. In this course we are required to choose a work of fiction of our choice to analyze and use as our primary research text throughout the course. Being a Jane Austen fan, I chose Pride and Prejudice. I am just now doing some preliminary research for a couple short summaries about Austen, Pride and Prejudice, and the times she lived in. I'm just wondering if anyone knows of any good sources regarding this sort of thing; summaries of the themes she addresses, the issues facing the world she lived in, and how they influenced her, are...

Hi! I'm in high school and am writing an english paper on Pride and Prejudice. Particularly on the theme of marriage. For examples of the different views on marriage, i will be using Elizabeth, Charlotte, and Mrs. Bennet. Do you think I would have better luck analyzing Lydia rather than Mrs Bennet?...

I recently came across the blog Sharp Elves Society, which is dedicated to the exploration of Jane Austen's "shadow stories". Among the author's ideas are that Jane Austen was a more radical feminist than Mary Wollstonecraft, that there really was something nefarious going on in Captain Tilney's marriage and that Jane Fairfax had a baby, gave it to Mrs Weston ... and the father was not Frank. I am in no way affiliated with the author, and indeed, find some of his hypotheses extremely circumstantial. However, I appreciate his bringing to light the complexity of Austen's intelligence and her knowledge of other authors. Here's the link to his blog. I'd encourage anyone interested ... 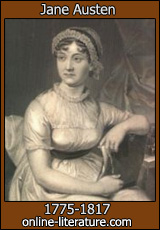 Here is where you find links to related content on this site or other sites, possibly including full books or essays about Jane Austen written by other authors featured on this site.