Mikhail Petrovich Artzybashev was born on 5 November, 1878 in Kharkov Province, Ukraine. As with many masters of writing of the time, he had to content himself with the art of parody, using satire and allegory to conceal the true message of his works. His early short stories are compared to the style of Leo Tolstoy, and with influences of Friedrich Nietzsche and Fyodor Dostoevsky they are filled with extreme pessimism and immorality and the themes of hedonism and free-will of the individual.

Sanine was received with shock and heated debate in 1907. Sanine's philosophy of free love and individuality, as his ".. soul had developed independently and distinctively.." clashed with the rapidly changing society of Christian ideals and self-sacrifice after the populist revolution of 1905. Sanine was misinterpreted and deemed scandalous with the strict censorship imposed on Russian writers at the time. It was ultimately condemned and banned in many countries.

Unfortunately, in 1923 Artzybashev was expelled from Russia for his decadence by the Bolsheviks, and so settled in Warsaw, Poland, a firm critic of the Soviet system. Some of his articles, stories and poems he contributed to The Echo (1920-1927), a Russian newspaper issued in Lithuania between two wars (1920-1927). It was owned by Russian writer and humorist Arkady Bukhov who had escaped from Bolshevik terror. The paper was representative of the literature of many displaced and exiled Russian writers of the time.

Artzybashev's son Boris (1899-1965) was born in Kharkiv, Russia (now in the Ukraine) and became a popular draftsman, illustrator, writer, and cartoonist for many publications including Time and Life magazines.

Mikhail Petrovich Artzybashev died in Warsaw, Poland on 3 March, 1917. In Defence of a Reputation: Essays on the Early Prose of Mikhail Artsybashev (1990) by Dr. Nicholas Luker "..concludes its aims to bring Mikhail Petrovich Artsybashev out of undeserved obscurity and to defend his literary reputation which has been unjustly tarnished by his notorious novel Sanin."

Other works of Artzybashev include:

The Works of Mikhail Artzibashev

I was surprised to see (what I thought was a thread) for Artzibashev in this forum, and decided to join in order mainly to learn from, and possibly participate in, the discussion of his works. However, after having set up my account, I realized that there is no discussion of this author taking place, but his novel Sanine is available online. My interest in this particular author was initiated by a reference to a book of his entitled The Last Line. When I looked around for his books, I learned that they were long out of print, and only through a couple of different used book sellers, whom I tracked down after quite a bit of sleuth work and other adventures, did I eventually manage to find ... 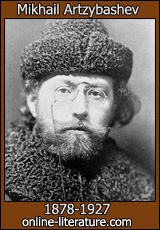 Here is where you find links to related content on this site or other sites, possibly including full books or essays about Mikhail Petrovich Artzybashev written by other authors featured on this site.