Hattie Cochrane (1891-1975), a friend of Johnston's would become the model for her character Little Colonel, a precocious young girl growing up in aristocratic Kentucky prone to bullying and temper tantrums. The series brought fame to the Pewee Valley and inspired a movie starring Shirley Temple and Lionel Barrymore. Young girls all over America were writing her letters of appreciation and devouring her books, which went on to sell over a million copies and were translated to many languages. They illustrate the social and moral tone of the times in Old Louisville and beyond. Johnston touched the hearts of many with her semi-biographical characters including The Old Colonel, Mom Beck, Papa Jack, Mrs. Sherman, Aunt Allison, and The Waltons, based on so many people in her real life.

Annie Julia Fellows Johnston was born on 15 May 1863 in Evansville, Indiana. Her mother was Mary Erskine Fellows and her father Albion Fellows was a Methodist minister who died when she was just two years old. Annie and her two sisters Lura and Albion (and later her brother Erwin) settled with their mother near her grandparent's farm in MacCutchenville, near Evansville.

At an early age Annie was expressive of her imagination and sensitive to her surroundings and the people in it, of which she observed in her many poems and stories. She was a voracious reader, attended Sunday school, and at the age of seventeen taught at the district school. She then went on to attend the University of Iowa. Back in Evansville she was a public school teacher. After some months spent travelling in Europe with her sister she married her cousin, widower William Johnston (d.1892). He had three children, though she never had any of her own. Her husband had encouraged her to write and submit her work to various magazines. Her first novel Big Brother was published in 1894.

Though Johnston was dealt tragedy in her life (in 1899 her stepdaughter Rena died, and stepson John contracted tuberculosis and died in 1910) she continued to produce the Little Colonel series and affect a positive influence on her readers. The Land of the Little Colonel: Reminiscence and Autobiography was published in 1929. She died on 5 October 1931 and lies buried at the Oak Hill Cemetery of Evansville, Indiana. 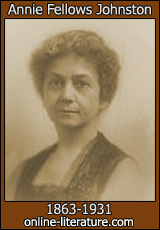 Here is where you find links to related content on this site or other sites, possibly including full books or essays about Annie Fellows Johnston written by other authors featured on this site.