With such memorable detectives as Ebenezer Gryce, New York City police officer and spinster sleuth Amelia Butterworth, Green successfully uses many of the genres' plot devices such as expert witnesses, medical inquiry, dead bodies found in libraries, and ballistics experts to find weapons. Her expert detailing of the logical procedure through discovery of possibilities, deduction, and reasoning won her readership all over North America and Europe. She maintained a correspondence with Ralph Waldo Emerson, admired Émile Gaboriau, and influenced Agatha Christie.

Anna Katherine Green was born on 11 November 1846 in Brooklyn, New York to parents Catharine Ann Whitney and James Wilson Green, lawyer. No doubt his career had an influence on his daughter's, who took early to writing poetry and short stories. In 1866 Green graduated from Ripley Female College in Poultney, Vermont, then moved back to New York to live with her extended family. The Leavenworth Case: A Lawyer's Story was published, followed by A Strange Disappearance (1880). After the success of Leavenworth Green had the confidence to submit her The Defense of the Bride and Other Poems (1882) to publishers though it did not receive the attention her detective novels achieved.

In 1884 Green married Charles Rohlfs, who would become an internationally acclaimed furniture designer. A year later their daughter Rosamund was born (d.1930), their son Sterling in 1887, and in 1892 Roland was born. Green maintained a steady income during her prolific career and lived a Victorian life of strong values and morals, often reflected in her works. The family settled in Buffalo in the late 1880's. Anna Katherine Green died at home on 11 April 1935.

Sing the praise of the Prophet of depression, anxiety touching the hearts of mankind

Hey Ann I am of that "happiness" Completely disappeared in the novels of Instructional Innovation is not my idea of the view My "gossip" is not love My "little green stick" silent So my work important than love life You said you love the most profound time in the early , I do not think so My experience Strong through the love of love of all I think you have fond memories of first love it still Maupassant He is the King short story Was 300 To plot to win But I think Chekhov excellent than him Was 400 Known to the profound thought Agreed that the West is the best short story writer Anton Chekhov But readers in Taiwan seems to prefer Maupassant ... 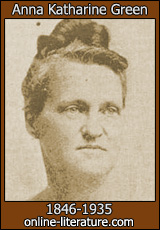 Here is where you find links to related content on this site or other sites, possibly including full books or essays about Anna Katharine Green written by other authors featured on this site.