Ann (née Ward) Radcliffe (1764-1823), English author, wrote The Mysteries of Udolpho (1794), a classic example of Gothic Romance fiction. The heroine, Emily St Aubert, is imprisoned in an Apennines fortress by a sadistic villain, Count Montoni, and at the mercy of her imagination;

fate sits on these dark battlements, and frowns,
And, as the portals open to receive me,
Her voice, in sullen echoes through the courts,
Tells of a nameless deed.

Ann Radcliffe was born on 9 July 1764 in London, England. The only child of William Ward and Anne Oates Ward, it is said that she was quite shy, and reclusive in her later years. At the age of twenty-two she married William Radcliffe, lawyer, and then editor and owner of The English Chronicle. The couple had no children.

Set in Middle Ages Scotland, The Castles of Athlin and Dunbayne: A Highland Story (1789) was Radcliffe's first novel. It was followed by A Sicilian Romance (1790) which weaves poetic vision and historical detail of Sicilian sensibilities. In A Romance of the Forest (1791) Adeline, having fled Paris and taken refuge in a desolate abbey, encounters sinister relics and endures a desperate struggle to escape its owners calculating grip to imprison her. It is also rich in detail of 19th century Roman Catholicism and oppression. Radcliffe wrote her travelogue A Journey Through Holland and the Western Frontier of Germany in 1795.

Her poem from the cover page of The Italian: or, The Confessional of the Black Penitents (1797);

He, wrapt in clouds of mystery and silence,
Broods o'er his passions, bodies them in deeds,
And sends them forth on wings of Fate to others,
Like the invisible Will, that guides us,
Unheard, unknown, unsearchable.

Radcliffe's archetypal characters journey through the psyche whilst traveling through highly graphic landscapes, with allusion to numinous and sublime forces at work. These elements combined to create the suspense and drama that popularised her works and won her acclaim as one of the best female writers of the genre. She influenced such other notable authors as Charles Baudelaire, Alexandre Dumas, Victor Hugo, Sir Walter Scott, and Mary Wollstonecraft. She died on 7 February 1823, and lies buried in Saint George's Church, Hanover Square, London, England.

William Radcliffe published Gaston de Blondeville and On the supernatural in poetry posthumously in 1826. Ann Radcliffe: A Bio-Bibliography (1996) was written by Deborah Rogers and contains an extensive bibliography and chronology of Radcliffe's life and works.

The Mysteries of Udolpho

'You speak like a heroine', said Montoni contemptuously. 'We shall see whether you can suffer like one'. And suffer Emily St. Aubert does, in Ann Radcliffe's best known Gothic shocker. The castle where she braves danger is Radcliffe's finest creation. 'There', said Montoni, 'is Udolpho'. Emily gazed with melancholy awe upon the castle, for the gothic greatness of its features and its mouldering walls of dark grey stone rendered it a gloomy and sublime object'. Emily endures physical threat and terror in gloomy vaults, apparently haunted rooms and a secret passageway leading from a door in her bedroom which she can't lock from the inside. And then there's the black veil.... 'Udolpho...

When 'The Italian' was published in 1797, the queen of Gothic fiction, Ann Radcliffe, was the most popular and influential novelist in England. The copyrights for 'The Italian' and her previous and best-known novel 'The Mysteries of Udolpho' (so memorably spoofed by Jane Austen in 'Northanger Abbey'),had sold for a combined sum estimated at around £100,000 in today's money. Her mysterious retirement from the publishing scene after 'The Italian' can perhaps be explained more in terms of the fact that she had achieved financial independence than that, as was rumoured, she had gone mad from the images she had conjured up in the writing of her novels! She was the leading exponent of the 'terrori... 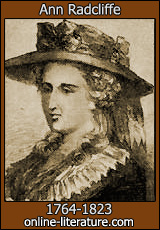 Here is where you find links to related content on this site or other sites, possibly including full books or essays about Ann Radcliffe written by other authors featured on this site.