At the close of the civil war the need for a market for the surplus cattle of Texas was as urgent as it was general. There had been numerous experiments in seeking an outlet, and there is authority for the statement that in 1857 Texas cattle were driven to Illinois. Eleven years later forty thousand head were sent to the mouth of Red River in Louisiana, shipped by boat to Cairo, Illinois, and thence inland by rail. Fever resulted, and the experiment was never repeated. To the west of Texas stretched a forbidding desert, while on the other hand, nearly every drive to Louisiana resulted in financial disaster to the drover. The republic of Mexico, on the south, afforded no relief, as it was likewise overrun with a surplus of its own breeding. Immediately before and just after the war, a slight trade had sprung up in cattle between eastern points on Red River and Baxter Springs, in the southeast corner of Kansas. The route was perfectly feasible, being short and entirely within the reservations of the Choctaws and Cherokees, civilized Indians. This was the only route to the north; for farther to the westward was the home of the buffalo and the unconquered, nomadic tribes. A writer on that day, Mr. Emerson Hough, an acceptable authority, says: "The civil war stopped almost all plans to market the range cattle, and the close of that war found the vast grazing lands of Texas fairly covered with millions of cattle which had no actual or determinate value. They were sorted and branded and herded after a fashion, but neither they nor their increase could be converted into anything but more cattle. The demand for a market became imperative."

This was the situation at the close of the '50's and meanwhile there had been no cessation in trying to find an outlet for the constantly increasing herds. Civilization was sweeping westward by leaps and bounds, and during the latter part of the '60's and early '70's, a market for a very small percentage of the surplus was established at Abilene, Ellsworth, and Wichita, being confined almost exclusively to the state of Kansas. But this outlet, slight as it was, developed the fact that the transplanted Texas steer, after a winter in the north, took on flesh like a native, and by being double-wintered became a marketable beef. It should be understood in this connection that Texas, owing to climatic conditions, did not mature an animal into marketable form, ready for the butcher's block. Yet it was an exceptional country for breeding, the percentage of increase in good years reaching the phenomenal figures of ninety-five calves to the hundred cows. At this time all eyes were turned to the new Northwest, which was then looked upon as the country that would at last afford the proper market. Railroads were pushing into the domain of the buffalo and Indian; the rush of emigration was westward, and the Texan was clamoring for an outlet for his cattle. It was written in the stars that the Indian and buffalo would have to stand aside.

Philanthropists may deplore the destruction of the American bison, yet it was inevitable. Possibly it is not commonly known that the general government had under consideration the sending of its own troops to destroy the buffalo. Yet it is a fact, for the army in the West fully realized the futility of subjugating the Indians while they could draw subsistence from the bison. The well-mounted aborigines hung on the flanks of the great buffalo herds, migrating with them, spurning all treaty obligations, and when opportunity offered murdering the advance guard of civilization with the fiendish atrocity of carnivorous animals. But while the government hesitated, the hide-hunters and the railroads solved the problem, and the Indian's base of supplies was destroyed.

Then began the great exodus of Texas cattle. The red men were easily confined on reservations, and the vacated country in the Northwest became cattle ranges. The government was in the market for large quantities of beef with which to feed its army and Indian wards. The maximum year's drive was reached in 1884, when nearly eight hundred thousand cattle, in something over three hundred herds, bound for the new Northwest, crossed Red River, the northern boundary of Texas. Some slight idea of this exodus can be gained when one considers that in the above year about four thousand men and over thirty thousand horses were required on the trail, while the value of the drive ran into millions. The history of the world can show no pastoral movement in comparison. The Northwest had furnished the market--the outlet for Texas.--Preface

Recent Forum Posts on The Outlet

Here is where you find links to related content on this site or other sites, possibly including full books or essays about Andy Adams written by other authors featured on this site. 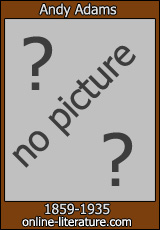