To dream over literary projects, Balzac says, is like "smoking enchanted cigarettes," but when we try to tackle our projects, to make them real, the enchantment disappears. We have to till the soil, to sow the seed, to gather the leaves, and then the cigarettes must be manufactured, while there may be no market for them after all. Probably most people have enjoyed the fragrance of these enchanted cigarettes, and have brooded over much which they will never put on paper. Here are some of "the ashes of the weeds of my delight"--memories of romances whereof no single line is written, or is likely to be written.

Of my earliest novel I remember but little. I know there had been a wreck, and that the villain, who was believed to be drowned, came home and made himself disagreeable. I know that the heroine's mouth was not "too large for regular beauty." In that respect she was original. All heroines are "muckle-mou'd," I know not why. It is expected of them. I know she was melancholy and merry; it would not surprise me to learn that she drowned herself from a canoe. But the villain never descended to crime, the first lover would not fall in love, the heroine's own affections were provokingly disengaged, and the whole affair came to a dead stop for want of a plot. Perhaps, considering modern canons of fiction, this might have been a very successful novel. It was entirely devoid of incident or interest, and, consequently, was a good deal like real life, as real life appears to many cultivated authors. On the other hand, all the characters were flippant. This would never have done, and I do not regret novel No. I., which had not even a name.

The second story had a plot, quantities of plot, nothing but plot. It was to have been written in collaboration with a very great novelist, who, as far as we went, confined himself to making objections. This novel was stopped (not that my friend would ever have gone on) by "Called Back," which anticipated part of the idea. The story was entitled "Where is Rose?" and the motto was--

The characters were--(1) Rose, a young lady of quality. (2) The Russian Princess, her friend (need I add that, to meet a public demand, her name was Vera?). (3) Young man engaged to Rose. (4) Charles, his friend. (5) An enterprising person named "The Whiteley of Crime," the universal Provider of Iniquity. In fact, he anticipated Sir Arthur Doyle's Professor Moriarty. The rest were detectives, old ladies, mob, and a wealthy young Colonial larrikin. Neither my friend nor I was fond of describing love scenes, so we made the heroine disappear in the second chapter, and she never turned up again till chapter the last. After playing in a comedy at the house of an earl, Rosa and Vera entered her brougham. Soon afterwards the brougham drew up, empty, at Rose's own door. Where was Rose? Traces of her were found, of all places, in the Haunted House in Berkeley Square, which is not haunted any longer. After that Rose was long sought in vain.

This, briefly, is what had occurred. A Russian detective "wanted" Vera, who, to be sure, was a Nihilist. To catch Vera he made an alliance with "The Whiteley of Crime." He was a man who would destroy a parish register, or forge a will, or crack a crib, or break up a Pro-Boer meeting, or burn a house, or kidnap a rightful heir, or manage a personation, or issue amateur bank-notes, or what you please. Thinking to kill two birds with one stone, he carried off Rose for her diamonds and Vera for his friend, the Muscovite police official, lodging them both in the Haunted House. But there he and the Russian came to blows, and, in the confusion, Vera made her escape, while Rose was conveyed, as Vera, to Siberia. Not knowing how to dispose of her, the Russian police consigned her to a nunnery at the mouth of the Obi. Her lover, in a yacht, found her hiding-place, and got a friendly nun to give her some narcotic known to the Samoyeds. It was the old truc of the Friar in "Romeo and Juliet." At the mouth of the Obi they do not bury the dead, but lay them down on platforms in the open air. Rose was picked up there by her lover (accompanied by a chaperon, of course), was got on board the steam yacht, and all went well. I forget what happened to "The Whiteley of Crime." After him I still rather hanker--he was a humorous ruffian. Something could be made of "The Whiteley of Crime." Something has been made, by the author of "Sherlock Holmes."

In yet another romance, a gentleman takes his friend, in a country place, to see his betrothed. The friend, who had only come into the neighbourhood that day, is found dead, next morning, hanging to a tree. Gipsies and others are suspected. But the lover was the murderer. He had been a priest, in South America, and the lady was a Catholic (who knew not of his Orders). Now the friend fell in love with the lady at first sight, on being introduced to her by the lover. As the two men walked home, the friend threatened to reveal the lover's secret--his tonsure--which would be fatal to his hopes. They quarrelled, parted, and the ex-priest lassoed his friend. The motive, I think, is an original one, and not likely to occur to the first comer. The inventor is open to offers.

The next novel, based on a dream, was called "In Search of Qrart."

What is Qrart? I decline to divulge this secret beyond saying that Qrart was a product of the civilisation which now sleeps under the snows of the pole. It was an article of the utmost value to humanity. Farther I do not intend to commit myself. The Bride of a God was one of the characters.

The next novel is, at present, my favourite cigarette. The scene is partly in Greece, partly at the Parthian Court, about 80-60 B.C. Crassus is the villain. The heroine was an actress in one of the wandering Greek companies, splendid strollers, who played at the Indian and Asiatic Courts. The story ends with the representation of the "Bacchae," in Parthia. The head of Pentheus is carried by one of the Bacchae in that drama. Behold, it is not a mask, but the head of Crassus, and thus conveys the first news of the Roman defeat. Obviously, this is a novel that needs a great deal of preliminary study, as much, indeed, as "Salammbo."

Another story will deal with the Icelandic discoverers of America. Mr. Kipling, however, has taken the wind out of its sails with his sketch, "The Finest Story in the World." There are all the marvels and portents of the Eyrbyggja Saga to draw upon, there are Skraelings to fight, and why should not Karlsefni's son kill the last mastodon, and, as Quetzalcoatl, be the white-bearded god of the Aztecs? After that a romance on the intrigues to make Charles Edward King of Poland sounds commonplace. But much might be made of that, too, if the right man took it in hand. Believe me, there are plenty of stories left, waiting for the man who can tell them. I have said it before, but I say it again, if I were king I would keep court officials, Mr. Stanley Weyman, Mr. Mason, Mr. Kipling, and others, to tell me my own stories. I know the kind of thing which I like, from the discovery of Qrart to that of the French gold in the burn at Loch Arkaig, or in "the wood by the lochside" that Murray of Broughton mentions.

Another cigarette I have, the adventures of a Poet, a Poet born in a Puritan village of Massachusetts about 1670. Hawthorne could have told me my story, and how my friend was driven into the wilderness and lived among the Red Men. I think he was killed in an attempt to warn his countrymen of an Indian raid; I think his MS. poems have a bullet-hole through them, and blood on the leaves. They were in Carew's best manner, these poems.

Another tale Hawthorne might have told me, the tale of an excellent man, whose very virtues, by some baneful moral chemistry, corrupt and ruin the people with whom he comes in contact. I do not mean by goading them into the opposite extremes, but rather something like a moral jettatura. This needs a great deal of subtlety, and what is to become of the hero? Is he to plunge into vice till everybody is virtuous again? It wants working out. I have omitted, after all, a schoolboy historical romance, explaining why Queen Elizabeth was never married. A Scottish paper offered a prize for a story of Queen Mary Stuart's reign. I did not get the prize--perhaps did not deserve it, but my story ran thus: You must know that Queen Elizabeth was singularly like Darnley in personal appearance. What so natural as that, disguised as a page, her Majesty should come spying about the Court of Holyrood? Darnley sees her walking out of Queen Mary's room, he thinks her an hallucination, discovers that she is real, challenges her, and they fight at Faldonside, by the Tweed, Shakespeare holding Elizabeth's horse. Elizabeth is wounded, and is carried to the Kirk of Field, and laid in Darnley's chamber, while Darnley goes out and makes love to my rural heroine, the lady of Fernilee, a Kerr. That night Bothwell blows up the Kirk of Field, Elizabeth and all. Darnley has only one resource. Borrowing the riding habit of the rural heroine, the lady of Fernilee, he flees across the Border, and, for the rest of his life, personates Queen Elizabeth. That is why Elizabeth, who was Darnley, hated Mary so bitterly (on account of the Kirk of Field affair), and that is why Queen Elizabeth was never married. Side-lights on Shakespeare's Sonnets were obviously cast. The young man whom Shakespeare admired so, and urged to marry, was--Darnley. This romance did not get the prize (the anachronism about Shakespeare is worthy of Scott), but I am conceited enough to think it deserved an honourable mention.

Enough of my own cigarettes. But there are others of a more fragrant weed. Who will end for me the novel of which Byron only wrote a chapter; who, as Bulwer Lytton is dead? A finer opening, one more mysteriously stirring, you can nowhere read. And the novel in letters, which Scott began in 1819, who shall finish it, or tell us what he did with his fair Venetian courtezan, a character so much out of Sir Walter's way? He tossed it aside--it was but an enchanted cigarette--and gave us "The Fortunes of Nigel" in its place. I want both. We cannot call up those who "left half told" these stories. In a happier world we shall listen to their endings, and all our dreams shall be coherent and concluded. Meanwhile, without trouble, and expense, and disappointment, and reviews, we can all smoke our cigarettes of fairyland. Would that many people were content to smoke them peacefully, and did not rush on pen, paper, and ink! 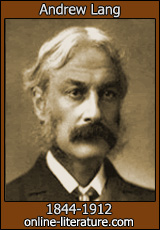