Anatole France was born in Paris on 16 April 1844. After attending school, including the boys' school Collège Stanislas in Paris, France worked for his father in his bookshop. He also started writing poetry and articles critical of church and state that were published in various newspapers of the day including Le Globe, L'Echo de Paris and Le Temps,. They would later be published in the collected volumes La Vie Litteraire (1888-1892) and Opinions Sociales (1902).

His marriage in 1877 was possibly unsuccessful due to his long term relationship with Mme de Caillavet who was a firm supporter and influence on his writing. As a respected critic and member of "Les Parnassiens", France went on to achieve acclaim with the novel Le Crime de Sylvestre Bonnard (1881) [The Crime of Sylvester Bonnard]. He wrote a number of semi-autobiographical novels including Le Livre de mon ami (1885) [My Friend's Book] and La Vie au fleur (1922) [The Bloom of Life]. In 1889 Balthazar appeared, followed by Thaïs in 1890.

"His knowledge is wide, his sympathies are many-sided, his power of exposition is unsurpassed. No one has set before us the mind of our time, with its half-lights, its shadowy vistas, its indefiniteness, its haze on the horizon, so vividly as he."
--from Jules LeMaitre's Preface to The Red Lily

A year after Jardin d'Épicure (1895) [The Garden of Epicurus] was published, France became a member of the French Academy. La vie de Jeanne D'Arc [Joan of Arc] was published in 1908. Allegorically satirising France's history, LÎle des pingouins was first published in 1908 [Penguin Island]. By the mid 1920's some of his works were placed in the Index of Forbidden Books of the Roman Catholic Church. He was awarded the Nobel Prize in Literature in 1921 "in recognition of his brilliant literary achievements, characterized as they are by a nobility of style, a profound human sympathy, grace, and a true Gallic temperament".

"Without the utopians of other times, men would still live in caves, miserable and naked. Utopia is the principle of all progress, and the essay into a better future". --Anatole France 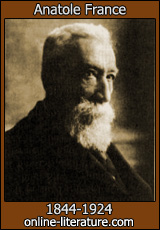 Here is where you find links to related content on this site or other sites, possibly including full books or essays about Anatole France written by other authors featured on this site.