Amelia E. Barr (1831-1919), teacher and author of historical romances set in England and the United States, wrote Remember the Alamo (1888), based on Texas' War of Independence and highly acclaimed, inspiring the 1960s film version starring John Wayne. Barr led a full and adventurous life, full of hardship and glory, travelling far and wide in North America and Europe, and on it's own much fodder for one of her most astounding works, her remarkable autobiography All the Days of My Life (1913);

"ln my life I have been sensible of the injustice constantly done to women. Since I have had to fight the world single-handed, there has not been one day I have not smarted under the wrongs I have had to bear, because I was not only a woman, but a woman doing a man's work, without any man, husband, son, brother or friend, to stand at my side, and to see some semblance of justice done me. I cannot forget, for injustice is a sixth sense, and rouses all the others."

Amelia Edith (née Huddleston) Barr was born on 29 March 1831 in Ulverston, Lancashire, England. Her parents were Mary Singleton (c.1806c.1858) and the Reverend Dr. William Henry Huddleston (d. c.1863), a Methodist minister. The Huddlestons moved frequently due to his Ministry so it happened that young Edith spent her early days in Shipley, Yorkshire. She had a vast collection of dolls which inspired her early characters. She was a voracious reader of the popular books of the time including Arabian Nights, Daniel Defoe's Robinson Crusoe and John Bunyan's Pilgrim's Progress. Encouraged by her parents, and reading aloud for her father she easily dealt with material deemed too sophisticated for most her age. Her education at some of the best schools was often interrupted by the moves, but she attended school in Cumberland for a time where she soon began her efforts at writing. When she was sixteen, witnessing her father's decline in fortunes and determined to support herself financially, she starting teaching at the boarding school in Downham Market, Norfolk.

A brief return to her father's financial stability allowed Barr to return to the Normal School in Glasgow where she learned the Stowe teaching method. Its principles are based on morality and lifelong learning, rather than learning by rote. On 11 July 1850, she and a prosperous local wool merchant, Scotsman Robert Barr, married. The couple emigrated to the USA in September of 1853, landing in New York city. In Chicago, Illinois Barr tutored at home, and established a school for girls, though she was not involved for long as her husbands' business prospects fell through and they travelled west to settle in Galveston, Texas, in 1866 where Robert Barr became an auditor for the state. Yellow fever claimed the lives of him and three of their children. Barr would have a total of twelve children but lose many in their early years. Of strong constitution and well-founded convictions, Barr did not escape the severe trials of life and love. She was quoted around her eighty-fourth birthday as saying;

"I keep my health because I keep my illusions. I do not believe that every one is false. I will not believe that hope tells a flattering tale or that friendship is only a name, or that true love has fled from the earth and that the fear of God has vanished. Love is life. So much love, so much life, and few women, have been so well loved as I."

Following her instincts and strong religious code, the widow Barr and her three remaining daughters returned to New York city where she resumed a teaching career in November of 1868. Through the encouragement of many, including Henry Ward Beecher whom she'd met in England, she turned her pen to writing short stories and essays on everything from opera to travel. One of her first sketches was Texas after the Civil War published in Appleton's in 1869. Other leading journals of the day that accepted her work were Christian Union, Harper's Bazar, Ladies' Home Journal and New York Ledger.

Her first novel's success, Jan Vedder's Wife (1885) encouraged her to continue. It was followed by the American revolution inspired The Bow of Orange Ribbon: a Romance of New York (1886) and The Maid of Maiden Lane (1900). Barr had found her niche, historical romance. Some of her critics bemoaned the predictable happy endings and sentimentality, but through extensive research, attention to detail, and wholesome characters her readers demanded more. She went on to produce over 60 titles in her lifetime. The Lion's Whelp (1901) is based on Oliver Cromwell's England and A Maid of Old New York (1911) on Peter Stuyvesant's New York. Red Leaves of a Human Heart (1913) contains an accurate description of life in 1800's Austin, Texas. Remember the Alamo is another story of the battle for Texas, following the life of San Antonio doctor Robert Worth and his family, divided by culture and beliefs but ultimately united by love. Barr created a few pseudonyms to increase her exposure, and by poetry alone it is said she earned more than $1000 a year. Her consistent success allowed her to maintain her country house, Cherry Croft, at Cornwall-on-Hudson, New York.

Amelia E. Barr died on 10 March 1919 in Richmond Hill, Long Island, New York. She lies buried in the Sleepy Hollow cemetery, near Tarrytown, New York. Her obituary appeared in the New York Times and the London Times on 12 March 1919, and the Richmond Hill Record on 15 March 1919.

other works by Barr include;

I am new to the Literature Network and am glad I found the web site and forums. I have a question for all of you and am hoping someone can assist. We have a copy of a book titled "A Wilful Woman" by Amelia E. Barr published by Dodd, Mead & Company in 1888. I can not find it listed in any Dodd, Mead & Company library list or works by the author. It has thirteen chapters and 227 pages. Outside cover is in great shape, light brown and has a decorative front board and spine with green and black ribbons and flowers. Because of its age all the pages are tanned and binding is a little loose but otherwise in good shape as well. Does anyone have any information regarding this advance review... 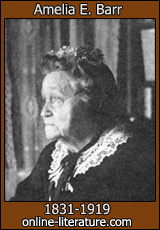 Here is where you find links to related content on this site or other sites, possibly including full books or essays about Amelia E. Barr written by other authors featured on this site.