Alice Hegan Rice (1870-1942), American author is best known for Mrs. Wiggs of the Cabbage Patch (1901) which was adapted to the stage and screen, one version starring Shirley Temple.

"This little story is lovingly dedicated to my Mother, who for years has been the Good Angel of "The Cabbage Patch", from Mrs. Wiggs of the Cabbage Patch--Alice Hegan Rice

As a thinly veiled social commentary on the then shantytown near Old Louisville, Cabbage Patch was an instant success. At times heart wrenching and humorous, with memorable characters in the Wiggs family surmounting enormous odds of impoverishment, marginalisation, and disillusion, it was an important piece of literature and is still in print today. The Macauley Theater production of Cabbage Patch opened in 1903.

Alice Caldwell Hegan was born on 11 January 1870 in Shelbyville, Kentucky. Her parents were Sallie Caldwell and Samuel Hegan, a local businessman. At an early age Alice was drawn to creative pursuits including drawing and writing poetry and short stories. She also started what would become a life-long philanthropic career advocating for the rights of the underprivileged. Alice lived most of her life in Louisville, which is where she met her husband, Cale Young Rice (1872-1943), author, dramatist, and poet.

The Rice's social life was active amongst the literati of Kentucky and elsewhere including Annie Fellows Johnston and Thornton Wilder; President Theodore Roosevelt also praised her works. The Rices proved a handsome pair and traveled around North America and Europe many times. They settled in the Neo-Colonial Revival home at 1444 Saint James Court in Louisville. Alice Hegan Rice died on 10 February 1942. She is buried at the Cave Hill Cemetery in Louisville, Jefferson County, Kentucky. Cale Young Rice died on 24 January 1943 and lies beside her. 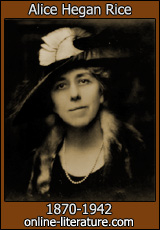 Here is where you find links to related content on this site or other sites, possibly including full books or essays about Alice Hegan Rice written by other authors featured on this site.