I had known something of New England village life long before I made my home in the same county as my imaginary Starkfield; though, during the years spent there, certain of its aspects became much more familiar to me. Even before that final initiation, however, I had had an uneasy sense that the New England of fiction bore little- except a vague botanical and dialectical- resemblance to the harsh and beautiful land as I had seen it. Even the abundant enumeration of sweet-fern, asters and mountain-laurel, and the conscientious reproduction of the vernacular, left me with the feeling that the outcropping granite had in both cases been overlooked. I give the impression merely as a personal one; it accounts for "Ethan Frome," and may, to some readers, in a measure justify it.

So much for the origin of the story; there is nothing else of interest to say of it, except as concerns its construction.

The problem before me, as I saw in the first flash, was this: I had to deal with a subject of which the dramatic climax, or rather the anti-climax, occurs a generation later than the first acts of the tragedy. This enforced lapse of time would seem to anyone persuaded- as I have always been- that every subject (in the novelist's sense of the term) implicitly contains its own form and dimensions, to mark Ethan Frome as the subject for a novel. But I never thought this for a moment, for I had felt, at the same time, that the theme of my tale was not one on which many variations could be played. It must be treated as starkly and summarily as life had always presented itself to my protagonists; any attempt to elaborate and complicate their sentiments would necessarily have falsified the whole. They were, in truth, these figures, my granite outcroppings; but half-emerged from the soil, and scarcely more articulate.

This incompatibility between subject and plan would perhaps have seemed to suggest that my "situation" was after all one to be rejected. Every novelist has been visited by the insinuating wraiths of false "good situations," siren-subjects luring his cockle-shell to the rocks; their voice is oftenest heard, and their mirage-sea beheld, as he traverses the waterless desert which awaits him half-way through whatever work is actually in hand. I knew well enough what song those sirens sang, and had often tied myself to my dull job until they were out of hearing- perhaps carrying a lost masterpiece in their rainbow veils. But I had no such fear of them in the case of Ethan Frome. It was the first subject I had ever approached with full confidence in its value, for my own purpose, and a relative faith in my power to render at least a part of what I saw in it.

Every novelist, again, who "intends upon" his art, has lit upon such subjects, and been fascinated by the difficulty of presenting them in the fullest relief, yet without an added ornament, or a trick of drapery or lighting. This was my task, if I were to tell the story of Ethan Frome; and my scheme of construction- which met with the immediate and unqualified disapproval of the few friends to whom I tentatively outlined it- I still think justified in the given case. It appears to me, indeed, that, while an air of artificiality is lent to a tale of complex and sophisticated people which the novelist causes to be guessed at and interpreted by any mere looker-on, there need be no such drawback if the looker-on is sophisticated, and the people he interprets are simple. If he is capable of seeing all around them, no violence is done to probability in allowing him to exercise this faculty; it is natural enough that he should act as the sympathizing intermediary between his rudimentary characters and the more complicated minds to whom he is trying to present them. But this is all self-evident, and needs explaining only to those who have never thought of fiction as an art of composition.

The real merit of my construction seems to me to lie in a minor detail. I had to find means to bring my tragedy, in a way at once natural and picture-making, to the knowledge of its narrator. I might have sat him down before a village gossip who would have poured out the whole affair to him in a breath, but in doing this I should have been false to two essential elements of my picture: first, the deep-rooted reticence and inarticulateness of the people I was trying to draw, and secondly the effect of "roundness" (in the plastic sense) produced by letting their case be seen through eyes as different as those of Harmon Gow and Mrs. Ned Hale. Each of my chroniclers contributes to the narrative just so much as he or she is capable of understanding of what, to them, is a complicated and mysterious case; and only the narrator of the tale has scope enough to see it all, to resolve it back into simplicity, and to put it in its rightful place among his larger categories.

I make no claim for originality in following a method of which "La Grande Breteche" and "The Ring and the Book" had set me the magnificent example; my one merit is, perhaps, to have guessed that the proceeding there employed was also applicable to my small tale.

I have written this brief analysis- the first I have ever published of any of my books- because, as an author's introduction to his work, I can imagine nothing of any value to his readers except a statement as to why he decided to attempt the work in question, and why he selected one form rather than another for its embodiment. These primary aims, the only ones that can be explicitly stated, must, by the artist, be almost instinctively felt and acted upon before there can pass into his creation that imponderable something more which causes life to circulate in it, and preserves it for a little from decay. 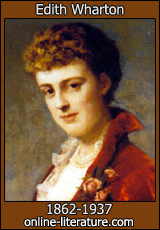