How the Portuguese Made a Superb Auto-De-Fe to Prevent Any Future Earthquakes, and How Candide Underwent Public Flagellation

After the earthquake, which had destroyed three-fourths of the city of Lisbon, the sages of that country could think of no means more effectual to preserve the kingdom from utter ruin than to entertain the people with an auto-da-fe, it having been decided by the University of Coimbra, that the burning of a few people alive by a slow fire, and with great ceremony, is an infallible preventive of earthquakes.

In consequence thereof they had seized on a Biscayan for marrying his godmother, and on two Portuguese for taking out the bacon of a larded pullet they were eating; after dinner they came and secured Dr. Pangloss, and his pupil Candide, the one for speaking his mind, and the other for seeming to approve what he had said. They were conducted to separate apartments, extremely cool, where they were never incommoded with the sun. Eight days afterwards they were each dressed in a sanbenito, and their heads were adorned with paper mitres. The mitre and sanbenito worn by Candide were painted with flames reversed and with devils that had neither tails nor claws; but Dr. Pangloss's devils had both tails and claws, and his flames were upright. In these habits they marched in procession, and heard a very pathetic sermon, which was followed by an anthem, accompanied by bagpipes. Candide was flogged to some tune, while the anthem was being sung; the Biscayan and the two men who would not eat bacon were burned, and Pangloss was hanged, which is not a common custom at these solemnities. The same day there was another earthquake, which made most dreadful havoc.

Candide, amazed, terrified, confounded, astonished, all bloody, and trembling from head to foot, said to himself, "If this is the best of all possible worlds, what are the others? If I had only been whipped, I could have put up with it, as I did among the Bulgarians; but, not withstanding, oh my dear Pangloss! my beloved master! thou greatest of philosophers! that ever I should live to see thee hanged, without knowing for what! O my dear Anabaptist, thou best of men, that it should be thy fate to be drowned in the very harbor! O Miss Cunegund, you mirror of young ladies! that it should be your fate to have your body ripped open!"

He was making the best of his way from the place where he had been preached to, whipped, absolved and blessed, when he was accosted by an old woman, who said to him, "Take courage, child, and follow me." 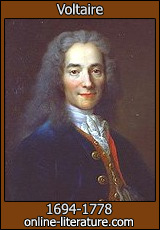