A figure in an indefinite tweed suit, carrying brown-paper parcels. That is what we met suddenly, at the bend of a muddy Dorsetshire lane, and the roan mare stared and obviously thought of a curtsey. The mare is road-shy, with intervals of stolidity, and there is no telling what she will pass and what she won't. We call her Redford. That was my first meeting with Judkin, and the next time the circumstances were the same; the same muddy lane, the same rather apologetic figure in the tweed suit, the same--or very similar-- parcels. Only this time the roan looked straight in front of her.

Whether I asked the groom or whether he advanced the information, I forget; but someway I gradually reconstructed the life-history of this trudger of the lanes. It was much the same, no doubt, as that of many others who are from time to time pointed out to one as having been aforetime in crack cavalry regiments and noted performers in the saddle; men who have breathed into their lungs the wonder of the East, have romped through life as through a cotillon, have had a thrust perhaps at the Viceroy's Cup, and done fantastic horsefleshy things around the Gulf of Aden. And then a golden stream has dried up, the sunlight has faded suddenly out of things, and the gods have nodded "Go." And they have not gone. They have turned instead to the muddy lanes and cheap villas and the marked- down ills of life, to watch pear trees growing and to encourage hens for their eggs. And Judkin was even as these others; the wine had been suddenly spilt from his cup of life, and he had stayed to suck at the dregs which the wise throw away. In the days of his scorn for most things he would have stared the roan mare and her turn-out out of all pretension to smartness, as he would have frozen a cheap claret behind its cork, or a plain woman behind her veil; and now he was walking stoically through the mud, in a tweed suit that would eventually go on to the gardener's boy, and would perhaps fit him. The dear gods, who know the end before the beginning, were perhaps growing a gardener's boy somewhere to fit the garments, and Judkin was only a caretaker, inhabiting a portion of them. That is what I like to think, and I am probably wrong. And Judkin, whose clothes had been to him once more than a religion, scarcely less sacred than a family quarrel, would carry those parcels back to his villa and to the wife who awaited him and them--a wife who may, for all we know to the contrary, have had a figure once, and perhaps has yet a heart of gold--of nine-carat gold, let us say at the least--but assuredly a soul of tape. And he that has fetched and carried will explain how it has fared with him in his dealings, and if he has brought the wrong sort of sugar or thread he will wheedle away the displeasure from that leaden face as a pastrycook girl will drive bluebottles off a stale bun. And that man has known what it was to coax the fret of a thoroughbred, to soothe its toss and sweat as it danced beneath him in the glee and chafe of its pulses and the glory of its thews. He has been in the raw places of the earth, where the desert beasts have whimpered their unthinkable psalmody, and their eyes have shone back the reflex of the midnight stars--and he can immerse himself in the tending of an incubator. It is horrible and wrong, and yet when I have met him in the lanes his face has worn a look of tedious cheerfulness that might pass for happiness. Has Judkin of the Parcels found something in the lees of life that I have missed in going to and fro over many waters? Is there more wisdom in his perverseness than in the madness of the wise? The dear gods know.

I don't think I saw Judkin more than three times all told, and always the lane was our point of contact; but as the roan mare was taking me to the station one heavy, cloud-smeared day, I passed a dull-looking villa that the groom, or instinct, told me was Judkin's home. From beyond a hedge of ragged elder-bushes could be heard the thud, thud of a spade, with an occasional clink and pause, as if some one had picked out a stone and thrown it to a distance, and I knew that HE was doing nameless things to the roots of a pear tree. Near by him, I felt sure, would be lying a large and late vegetable marrow, and its largeness and lateness would be a theme of conversation at luncheon. It would be suggested that it should grace the harvest thanksgiving service; the harvest having been so generally unsatisfactory, it would be unfair to let the farmers supply all the material for rejoicing.

And while I was speeding townwards along the rails Judkin would be plodding his way to the vicarage bearing a vegetable marrow and a basketful of dahlias. The basket to be returned. 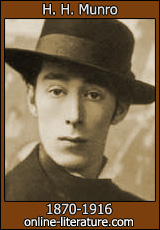